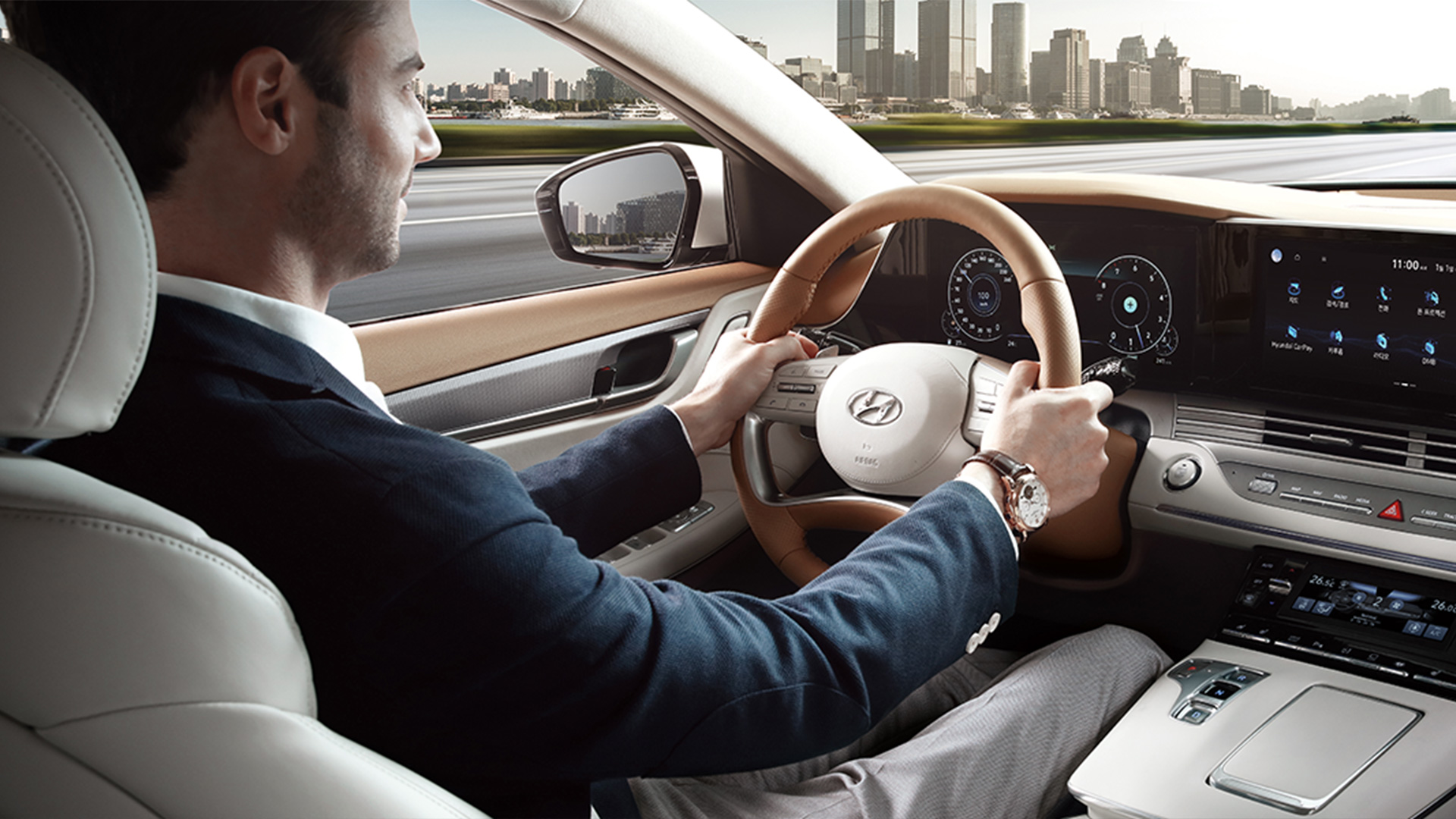 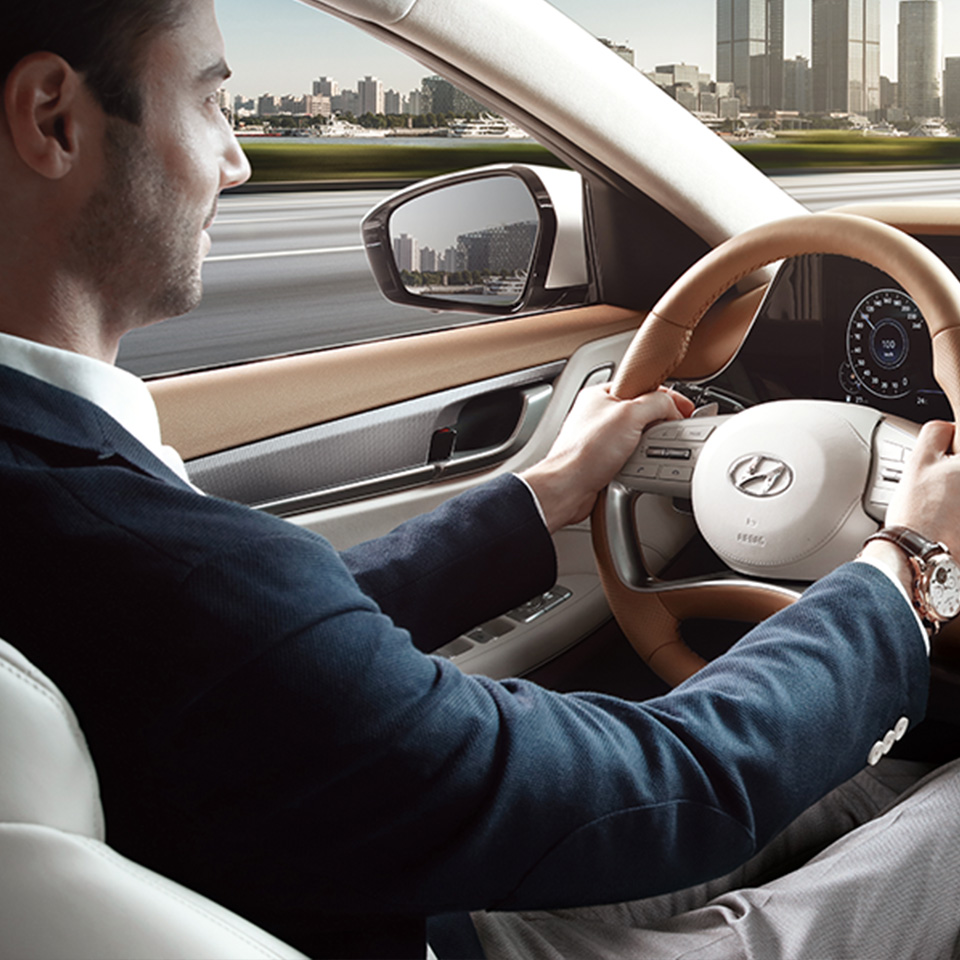 In this article, we look at how ADAS (Advanced Driver Assistance System)’s application to convenience features that reduce driver fatigue.

Applications of Hyundai/Kia Motors’ ADAS technology follow two types: on the one hand, the technology works to prevent accidents by complementing the driver’s attention with its safety features. In this article focuses on convenience features that reduce driver fatigue, specifically by assisting the driver’s maneuver of acceleration, braking, and steering. HDA (Highway Driving Assist), a semi-autonomous driving technology that maneuvers the vehicle on the highway at the preset speed and following distance, is probably the most well known of such convenience features.

In order to best take advantage of the ADAS’s offerings, however, it is important for the drivers to understand the basic mechanism through which the technology functions. Doing so will help the drivers escape the common misunderstanding about ADAS that often causes them to misinterpret the correct working order as broken. In addition, understanding the new wave of government regulations on ADAS is also important to grasp the function’s range of application. Depending on the occasion, the regulations place limits on the function for safety reasons.

In present, three ADAS-applied convenience features are active on Hyundai/Kia models: SCC (Smart Cruise Control), NSCC (Navigation-based Smart Cruise Control), and HDA (Highway Driving Assist). We explore these functions, as well as the fourth function in development, in a Q&A format below.

Q. How does Hyundai/Kia’s SCC function?

But new improvements to the cruise control technology may change all that. Smart Cruise Control, the newest evolved form of the tech, now maintains not only the vehicle speed but also the following distance. Like the old cruise control, SCC maintains the speed of the vehicle at the level set by the driver. Then, if a slow car appears ahead, it adjusts the speed to maintain the following distance; it returns to the preset speed only after the car ahead disappears from the forward-facing radar sensor.

It’s our newest improvement to the existing SCC system. As discussed, SCC maintains the following distance to the vehicle ahead. But if that vehicle comes to a complete stop, the old system displayed a short warning and turned off the SCC function. Basically, the new Stop & Go function keeps the SCC running even when the vehicle has to completely stop. If the vehicle ahead stops, the SCC will come to a stop, and go when the sensors detect the preceding vehicle goes. The function is extremely useful during congestion, where the driver has to “stop & go” repeatedly.

We put that function in because we wanted to prioritize safety. A full stop of more than three seconds likely implies a situation that requires driver attention―perhaps a crossroad, a confusing junction, a stop sign, what have you―so we did not want the Stop & Go function to continue to run then, lest there be accidents. It is important to us that the users of ADAS understand that the system is expected to assist the drivers; it cannot yet react to on-road contingencies as human drivers can.

Incidentally, in order to use the Stop & Go function, the car needs to be equipped with an additional forward-facing camera beyond the standard radar used by SCC.

Q. What is the difference between SCC and NSCC (Navigation-based Smart Cruise Control)?

The existing SCC was only able to recognize the surrounding vehicles to operate cruise control; the NSCC uses the navigation’s road information in addition to better optimize the automated driving.

This function is based on the information of the navigation system. Therefore, it cannot react to the safe zones not covered by the navigation data, such as recently established construction zones. The function can also be disabled if the driver turns it off in the infotainment system’s navigation setting.

The Curve function (NSCC-C) uses the navigation data to predict the incoming curve on the road, reduces the cruising speed, and, upon exiting the curve, returns the speed to the preset level. The crux of the function is in ensuring safety: turning a curve without reducing speed is a recipe for accidents. Using the navigation’s map data, NSCC-C calculates the appropriate level of speed reduction, incorporating the vehicle’s current speed and the radius of the turn into the calculation. In the end, the function works well to maintain vehicle stability even while turning an abrupt curve.

All aforementioned functions could only be active in highways designated officially by the Ministry of Land, Infrastructure, and Transport. The reasoning behind the regulation was that highways contain fewer variables than other roads, such as stop signals and crossroads. But Hyundai’s The New Grandeur and Kia’s 3rd-gen K5 made significant enough improvements in the sensors and control mechanisms to have the regulation lifted. They can be driven in NSCC mode for not only highways but also expressways.

Q. Apparently there is an SCC that is capable of adjusting the speed on highway ramps?

Titled NSCC-R (Ramp), the function developed by Hyundai makes cruise control useful even at the highway junctions and interchanges. The first of its kind to be developed in Korea, NSCC-R uses the navigation data to predict the entry into a ramp and adjusts the cruising speed accordingly while on it. It is scheduled for application on the Genesis line SUV GV80.

The function’s working principle is simple. When the car is driving at the last lane and approaches the entryway to a ramp (as determined by the navigation data), NSCC will reduce the speed to appropriate levels throughout the ramp and return to the preset speed once the vehicle is completely out of it. The speed levels are calculated, once again, by incorporating the current vehicle speed and the radius of the ramp.

Given the advanced nature of the function (where precise detection of the ramp entryway is crucial), NSCC-R requires the installation of forward-side and rear-side facing radar sensors in addition to the standard forward-facing radar.

HDA combines the core advantages of NSCC and Lane Following Assist (LFA) System to make highway driving drastically more convenient. The function automatically activates when the SCC is turned on and the navigation understands the car to be driving on a highway.

HDA uses the information from the forward-facing camera and radar sensor as well as the navigation data to control the speed, direction, and following distance of the vehicle. In essence, it adds to the NSCC’s function the advantages of LFA, which keeps the vehicle’s center at the center of the lane, an improvement from the old LKA (Lane Keeping Assist) that merely intervenes when the vehicle drifts away from the lane.

As said, SCC Stop & Go function pauses when the vehicle comes to a complete stop for more than three seconds. But HDA, which works only on highways free from various on-road variables, is active for nearly 30 seconds after coming to a full stop, freeing the driver from the fatigue of congested highways.

Q. HDA Sometimes turns off when the car goes through a highway toll. Why is this so?

Indeed, HDA is designed to turn off at a toll gate. The toll zone is technically part of the highway, but there are too many variables, like lanes abruptly separating and combining, that make stable autonomous control difficult. Depending on the vehicle model, an alarm is sounded when the HDA function turns off. But again, even when ADAS is on, drivers should always look forward, pay full attention, and immediately intervene when necessary. Still, the new ADAS technology applied to Genesis GV80 is advanced enough that we felt comfortable letting HDA run in toll zones as well. That should help those fatigued highway drivers.

Q. The allowed hands-off time during HDA mode seems to vary by vehicle model. Why is this so?

On the whole, HDA allows the drivers to experience semi-autonomous driving, hands-and-feet-free. But they cannot leave the steering unattended indefinitely. For safety reasons, the system signals hands-off alarms when the driver is absent from the handle and turns off the function at the regulation limit.

Whether the driver is holding the steering wheel is determined by measuring the force of the driver’s hands conveyed to the steering wheel. Because the measurements vary by the driving conditions (particularly the road surface), the time necessary for the determination can also vary a little.

The expected domestic regulations are as follows. With the ADAS function activated, if the driver’s hands are off the steering wheel for approximately 15 seconds, a visual warning must be made. If the warning is ignored and 15 more seconds pass (in sum 30 seconds of hands-off time), an auditory warning is to be made in addition to the visual one. The warnings will continue for 30 more seconds, and if the driver’s hands are still not back on the steering wheel at that point, the HDA function will turn off and an emergency alarm is sounded. In short, one full hands-off minute will result in the deactivation of HDA.

The regulation will not only impact new models but also apply retroactively to all vehicles starting from the second half of 2021, though the demands made on the manufacturer to satisfy the regulations may be earlier than that. As a result, even the same car model may have slightly different ADAS settings depending on the year of manufacture.

Because Hyundai’s The New Grandeur and Kia’s 3rd-gen K5 preemptively satisfied the expected regulation, the drivers may feel as if the existing hands-free benefits of ADAS have been truncated―but the adjustments merely follow the government regulation, which all cars on the road will ultimately have to follow anyway.

Q. Does HDA work only on highways?

Previously, HDA only worked on highways officially designated by the Ministry of Land, Infrastructure, and Transport. Because HDA only activates on roads understood as highways in the highly precise navigation map data, the driver could not use the function for non-highways.

The reason for the limitation was safety: highways have relatively fewer variables and feature predominantly in long-distance travel, the very purpose for which cruise control technology was developed. The limitation, in some sense, helped the drivers enjoy the convenient technology in the most stable and appropriate condition.

But thanks to the improved reliability of the control systems, Hyundai’s The New Grandeur and Kia’s 3rd-gen K5 succeeded in extending the technology’s application to car-only expressways. The expressways may appear similar to highways in driving conditions, but the former often comes with crossroads, crosswalks, and more frequent and peculiarly-shaped curves. In a more technical sense, the amount of data processing necessary for HDA at an expressway easily trumps the amount necessary at a highway.

As shown, Hyundai/Kia’s ADAS technology is ceaselessly developing to provide better convenience features to the drivers while fully adhering to government regulations. Better understanding the capabilities and the limits of ADAS will help the drivers take advantage of the technology to its fullest extent―thus ensuring a safer and more convenient driving experience for all. 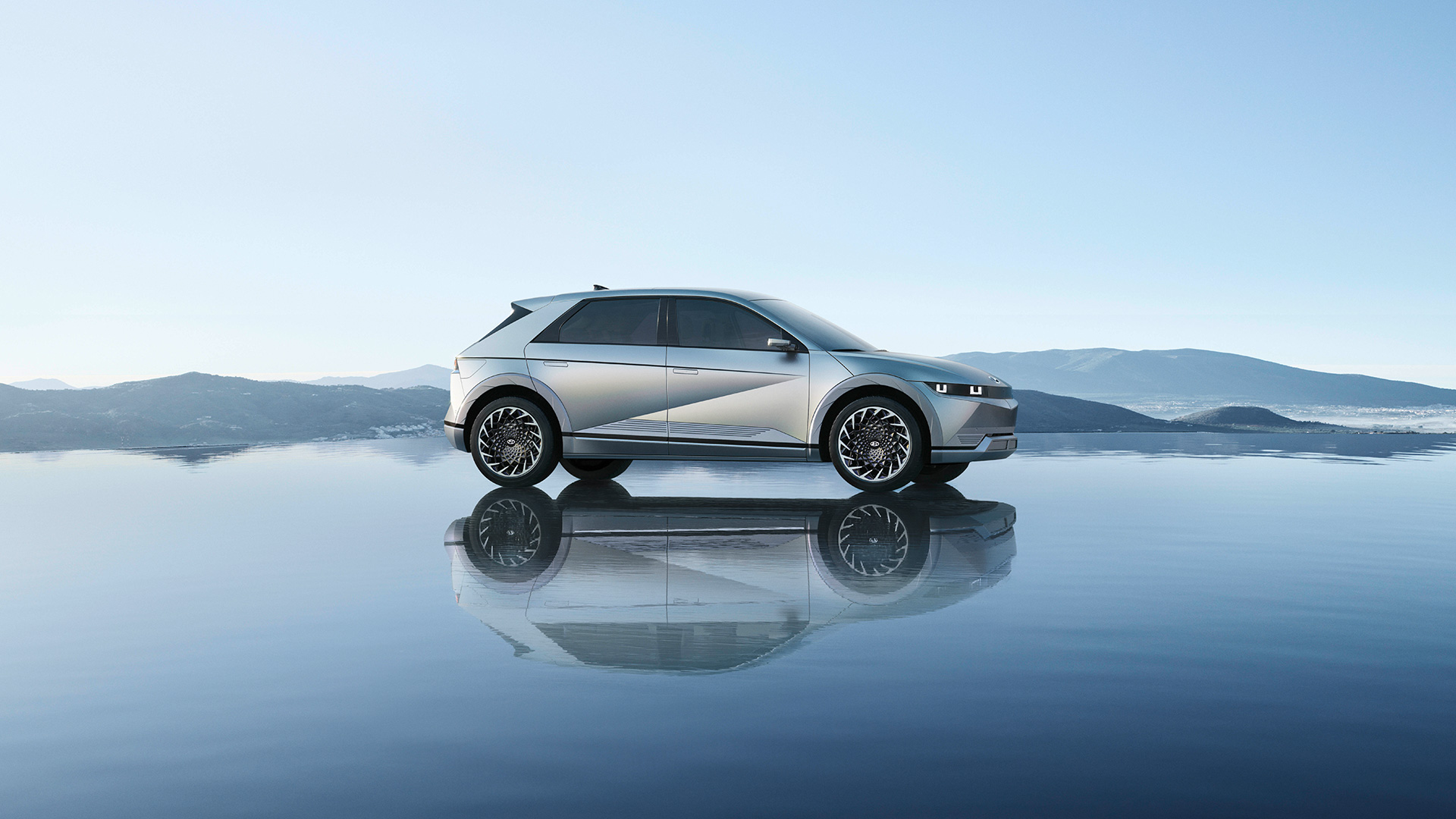 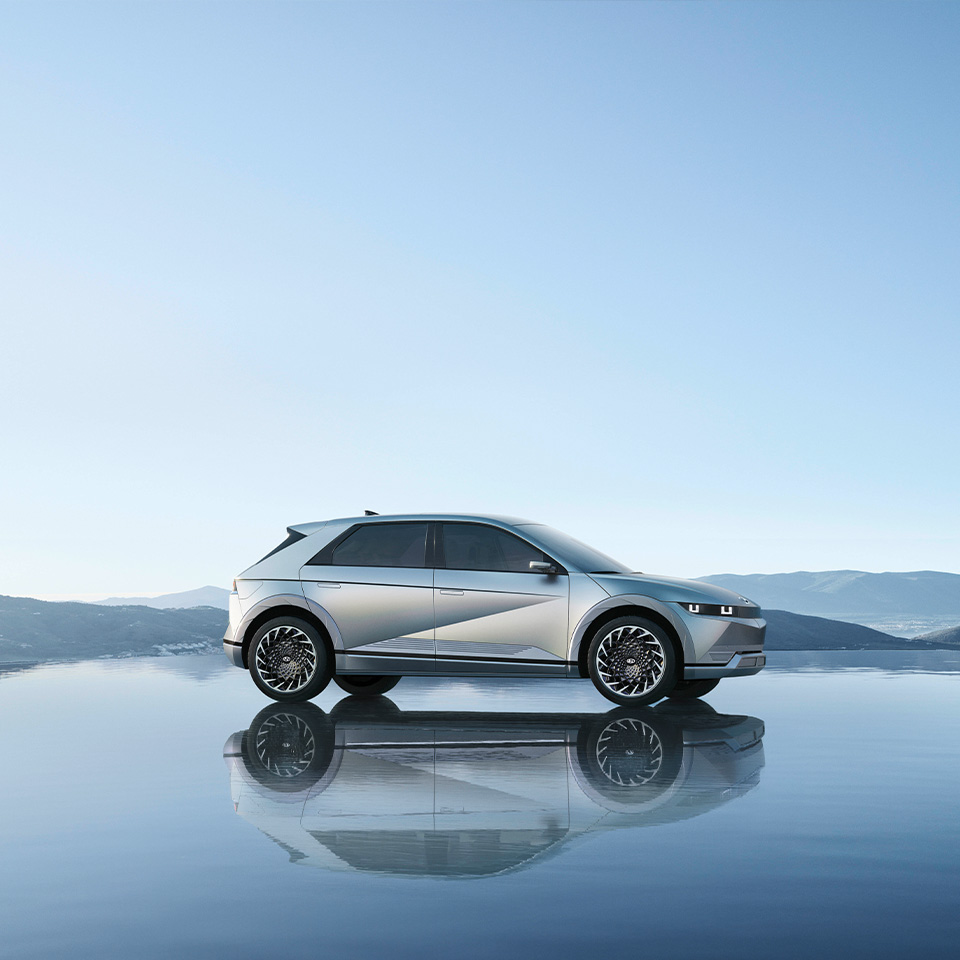