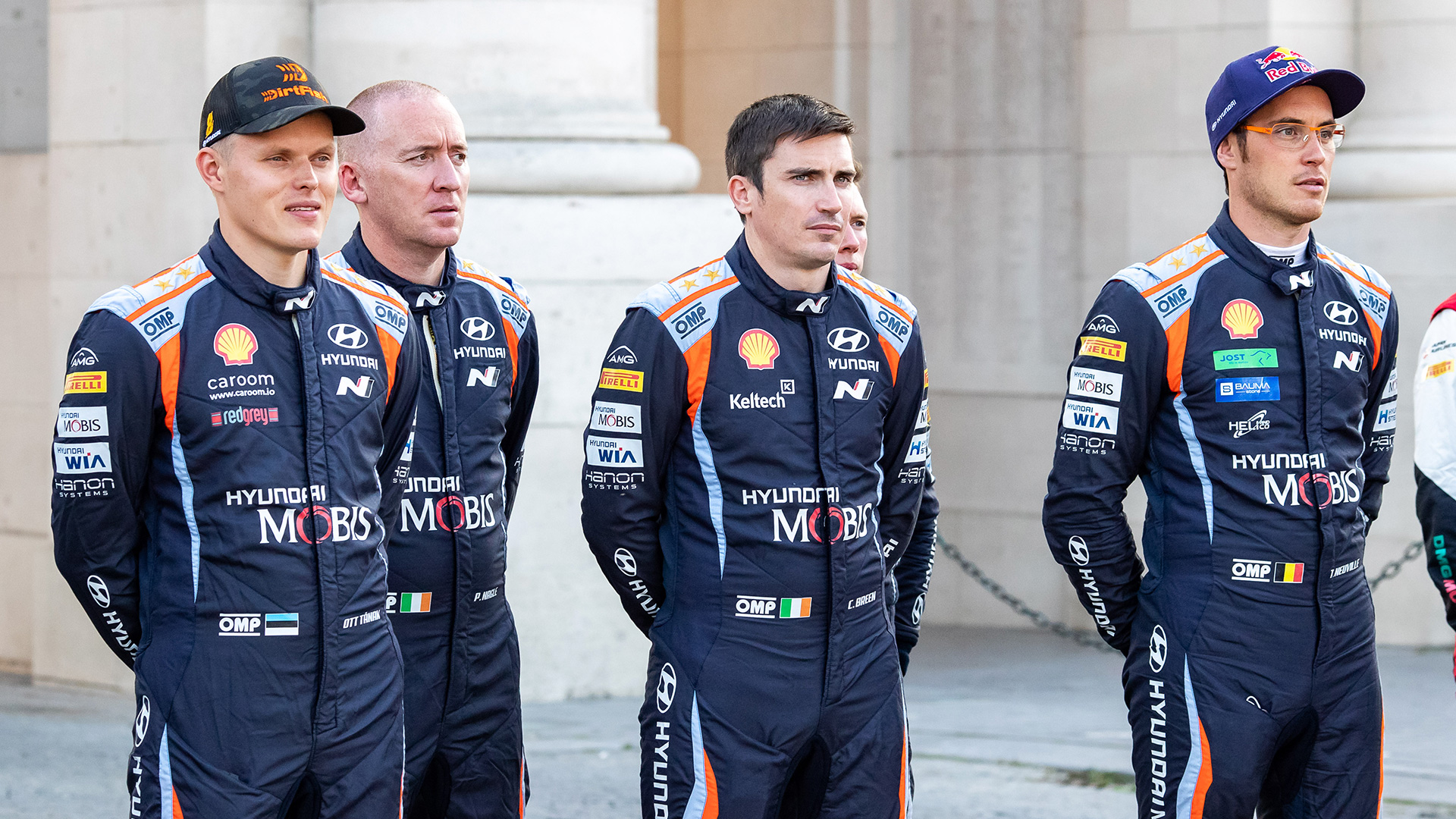 Hyundai Motorsport registered a ‘one-two finish’ in Belgium. Neuville and Breen did a great job, and with 51 points plus Power Stage points, the Hyundai team came close to leading the way for the Manufacturers' Championship.

On August 13-15, the 8th WRC was held in Belgium, a new stage. Its official name is WRC Renties Ypres Rally Belgium. Ypres Rally is a Belgian national rally event that started in 1965, and is included in the Belgian National Championships, as well as the European Rally Championship (ERC) and InterContinental Rally Challenge (IRC). Last year, the WRC was hastily confirmed during the pandemic, but was canceled at the last minute due to the spread of the virus. Again this year, Belgium was not included in the WRC schedule, but the event was finally held due to the cancellation of Rally UK. This makes Belgium the 35th country to host the WRC, allowing Hyundai Motorsport's Thierry Neuville and co-driver Martin Wydaeghe to compete in their home country.

This year's WRC Belgium Rally was a success with 108 entries. It is the largest entry since the 2015 French Rally (125 cars). This year there are 10 top-level World Rally Cars and the Alpine A110 RGTs on Tarmac. Ypres, the headquarters of the Rally, is a small town in the Flandre region of northern Belgium, one of the biggest battlegrounds of World War I. At that time, several large-scale battles that resulted in numerous casualties were the first large-scale chemical warfare of mankind. Most of the city center was destroyed at the time but was rebuilt after the war. For this reason, Ypres is now called the ‘City of Peace’.

There are a total of 20 stages of 295.78km, and most of them are concentrated within a 30km radius of Ypres. Participants must run at high speed on a narrow, winding farm road through fields. Drains and power poles lurk around the road, and cars driving ahead sometimes sprinkle gravel or dirt behind them. Participants with little local experience are required to fill out detailed pace notes with only two recces. Belgium, the second Tarmac rally of the season, is notorious for its volatile weather. When it rains, some sections become extremely slippery. The venue for the Sunday race is also special; The Circuit de Spa-Francorchamps is where the F1 Belgian Grand Prix is held.

Belgium, which is tied into the three Benelux countries along with the Netherlands and Luxembourg, has produced very good drivers. Jacky Ickx, a living legend who won eight F1 wins and six Le Mans wins, as well as Thierry Boutsen and Eric van de Poele are from Belgium. In Rally, there are Francois Duval and Freddy Loix. Loix, who was with Hyundai Team from 2002 to 2003, is a 'Ypres Master' who has won 11 times in the Ypres Rally. And Thierry Neuville of Hyundai is by far the best star among the current Belgian drivers. He made his WRC debut in 2009, and since 2014 he has recorded 13 victories with the Hyundai Team.

In this race, Hyundai Team played Ott Tanak and Craig Breen, centering on Thierry Neuville, who has extensive local experience. It was also the Belgian that drew the most attention. Born in St. Vith, Belgium, Neuville has participated in Rally Ypres 7 times so far, and in 2019 with his i20 WRC rally car. He is the only current player to experience the Belgian course with the brand-new World Rally Car. “It's very challenging as the roads are quite narrow and slippery and the ditches on both sides are always very deep, so you have to make sure to not make any mistakes and keep all four wheels on the road,” explained Neuville about the tricky Belgium courses. Breen is also an experienced Belgian driver. Breen's favorite of all event rallies is the Ypres Rally, where he drove the 2019 Volkswagen Polo and won the overall championship.

Meanwhile, Hyundai put i20 N Rally 2 for the first time with Oliver Solberg and Jari Huttunen. The i20 N Rally 2 is a new weapon that replaces the i20 R5 rally car of the WRC2 and WRC3. As it is the successor model of the i20 R5, which has been performing tremendously in rallying around the world, it drew a lot of attention. Pierre-Louis Loubet entered the Hyundai C2 Competition.

On Friday, August 13th, the race started with 8 stages (135.34km in total) around Ypres. The 23.62km long Kemmelberg (SS3, SS7) is a stage that symbolizes the Ypres Rally. It is also famous for the 'Spring Classic', a cycling event, and draws a large number of spectators. Fortunately, there was no rain in the forecast. It was filled with only the warm sunlight from the torrential rains and floods that plagued Western Europe all summer.

The Hyundai trio went ahead with fierce speed from the start. It was Tanak who caught the opening stage, and Breen was the fastest in SS2 and SS3. Neuville of the home ground tried to maintain the lead after taking the overall lead with SS4 top time. Neuville was in good physical condition (he hurt his eyes back in Estonia) and so was his car. However, his glasses kept falling off and he suffered an unexpected embarrassment; still, no one could stop him from going on.

After falling from SS4, Neuville, who recorded top time for four consecutive times, finished Friday with an overall lead. The time difference with 2nd place Breen is 7.6 seconds, and Tanak is 31.2 seconds behind Neuville. Hyundai overtook their rivals by taking all the top three positions. Tanak had a problem with the engine shutting down, but he stopped fourth-placed Rovanpera by 1.4 seconds. He then was followed by Evans, Ogier, Katsuta, and Loubet.

Meanwhile, Friday was a terrible day for M Sport. Adrian Fomo completely abandoned the race as his car was wrecked while rolling in an SS3 high-speed corner, and Greensmith fell into a ditch as soon as he left SS4. Even Suninen, who rode the new Fiesta Rally 2, had a flat tire and the engine stopped. Thanks to this, Hyundai Team Solberg ranked 10th overall and took the lead in the WRC2 class. The final stage SS8, which was scheduled to start at 8:48 p.m. close to sunset time, was canceled for safety reasons.

On Saturday, August 14, the race was also held in 8 stages, 119.92km section. The opening stage SS9 Hollebeke ran in the opposite direction to the previous year at 25.86 km, the longest of the race. The road surface is a mixture of concrete and asphalt, and the road width is constantly changing.

Tanak stopped the car with a punctured tire on the opening stage, but the jack that lifts the car broke and lost two and a half minutes. In the process, he tried to give way to Breen, who was right behind him, but he had no choice but to lose time too. Nevertheless, Breen was the fastest in SS9 and took the top time for two consecutive times until SS10, narrowing the time gap with Neuville. The Hyundai C2 Competition's Pierre-Louis Loubet retired in a ditch in SS9, while Toyota's Katsuta rolled heavily in the SS10, which caused a power pole to hit the road, causing the race to pause for a while.

Evans, in his third place, won the Toyota Team's first top time in this race in SS11. However, the time difference with 2nd place Breen is 30.3 seconds, which is only 1.1 seconds shorter. Neuville held the SS12, SS14 and final SS16 to defend their overall lead position. The time difference with RMB 2 Breen is 10.1 seconds. He increased the time difference to 32.3 seconds, despite Evans' fierce pursuit. After Evans in 3rd place, Rovanfera, Ogier and Tanak were placed. The Toyota Trio is only 4.3 seconds behind the third place. Solberg of Hyundai Team, who participated in WRC2, placed 14th overall, and Hutunen placed 17th. Solberg had to hold the steering wheel with both hands due to a power assist failure, so the co-driver operated the hand brake. However, all of M Sport's Fiesta Rally 2 were retired, and only the Hyundai team's duo survived WRC2.

On Sunday, the highlight of the rally is the Circuit de Spa-Francorchamps. It is a circuit of history and tradition, where the F1 Belgian Grand Prix and the endurance race Spa 24 Hours are held. To get to the Circuit de Spa-Francorchamps from Ypres, where the rally headquarters is located, you would have to travel almost 300 kilometers across the Belgian territory from east to west. For this reason, a Remote service (external service headquarters, not a service park) was provided on the circuit paddock.

Both the 9.05km-long Stavelot (SS17, SS19) and 11.21km-long Circuit de Spa-Francorchamps (SS18, SS20) stages start from the outside road and continue to the circuit. Stavelot was originally much longer, but was inevitably cut in half due to recent floods. The Circuit de Spa-Francorchamps stage starts from the north side of the circuit and runs through the famous La Source hairpin and Eau Rouge corner.

Neuville had about 40 seconds to spare with the Toyota team, but he did not lose his prudence. This is because there have been several times when we ran into unexpected problems while leading the way. In the opening SS17, Ogier's time difference with Rovanpera was increased to 9 seconds due to a flat tire. Meanwhile, Solberg retired due to an electrical problem that prevented the engine from starting. Therefore, only Huttunen remained in WRC2.

Tanak had top times in SS18 and SS19, while Rovanpera pushed Evans to third overall. Breen was a bit slow on SS19, but still has a 17.5 second time difference with Rovanpera. After running three stages, the participants who received the service headed to the final decisive battlefield, SS20. But nothing happened in the Belgian final stage; Tanak, Ogier, Neuville, Rovanpera, and Evans took the 1st-5th place to score extra points for the Power Stage.

In the end, Neuville lifted the trophy at the first WRC in their home country. It was also his first win with co-driver Wydaeghe, whom he has been working with since this year. It was Wydaeghe's first WRC championship trophy, and it was even more meaningful because it was his home country victory. According to the team's decision, Breen, who went easy on the race, came in 2nd place, and the Hyundai team perfectly defeated Belgium with 'One Two Finish' and the probability of keeping the title of '2nd consecutive manufacturer's overall championship' increased. It was Rovanpera who took the final place on the podium after fierce intra-team competition. It was followed by Evans, Ogier and Tanak.

The Hyundai team, which gained 51 points by adding Neuville, Breen, and Power Stage points, narrowed the gap with Toyota in the manufacturer's championship points to 41 points. There are still four rounds left, so that's a good enough score to turn over. In the driver category, Neuville added 28 points, making Evans' 124 points. He is 38 points behind Ogier. Tanak, who lost 3rd place due to Saturday's trouble, had to have only 8 points in 6th place and 5 Power Points.

The 9th WRC, to be held on September 9-12, will be held in Greece, the birthplace of modern civilization. Along with Belgian Ypres, Greece was one of the options. But unlike the newborn Ypres, Greece is a rally with history and tradition; the rough and fast mountain roads will be the testbed for durability of the rally cars. 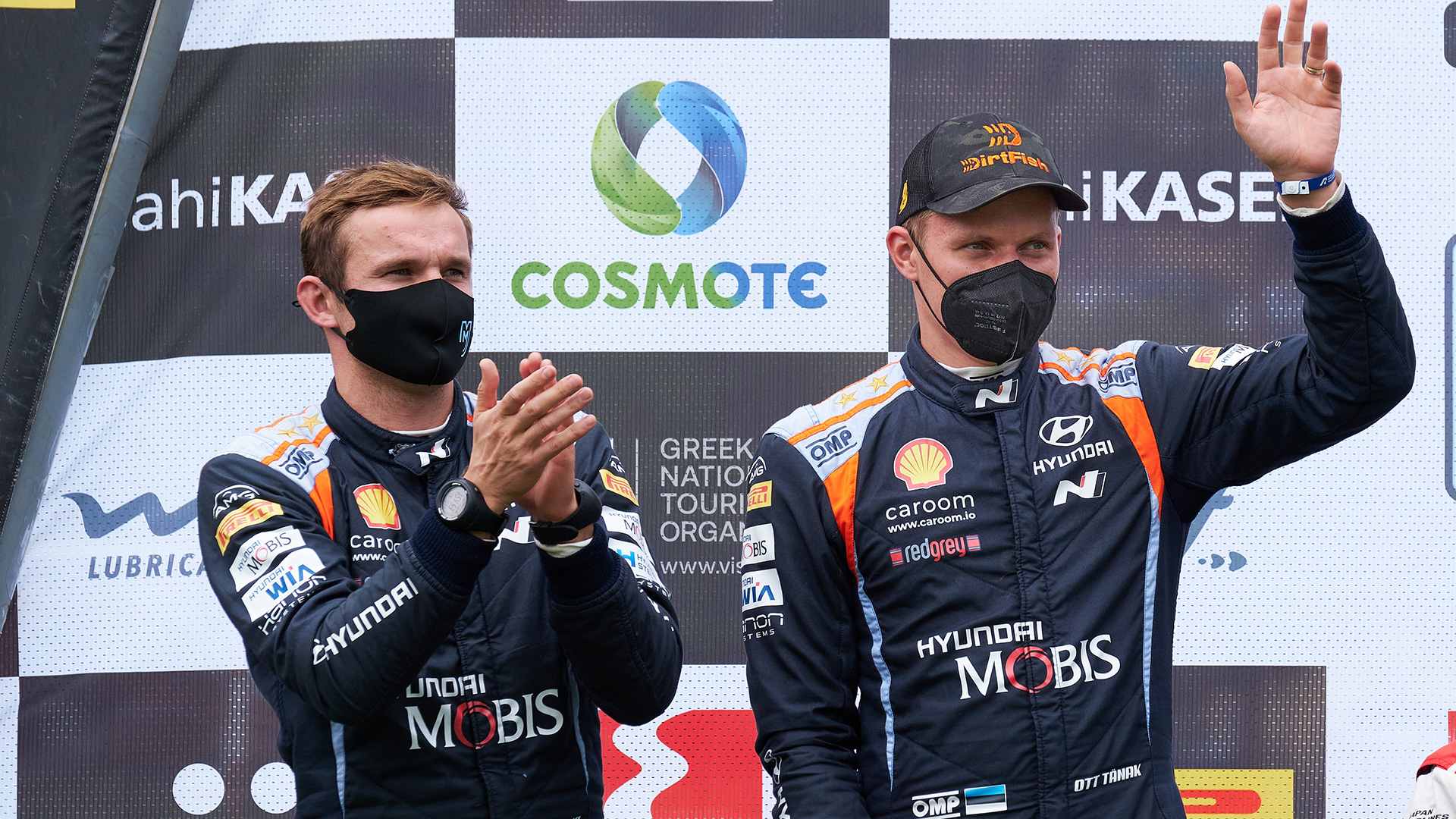 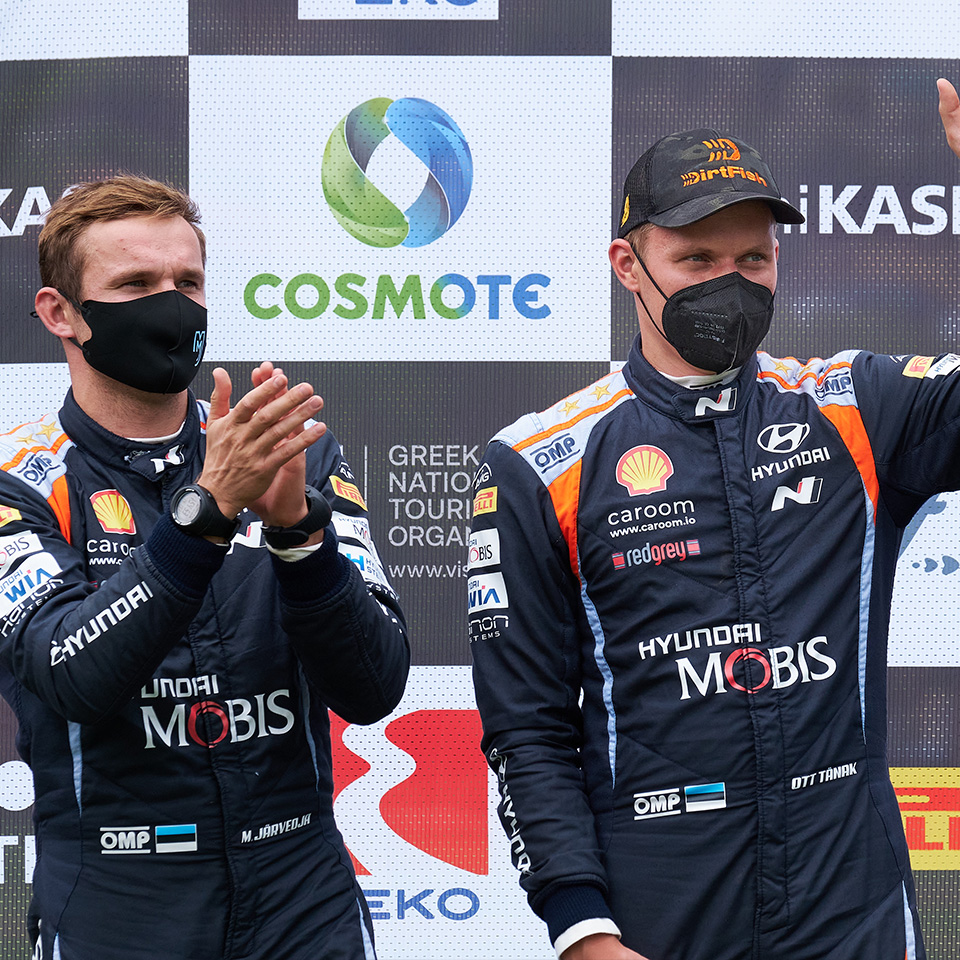