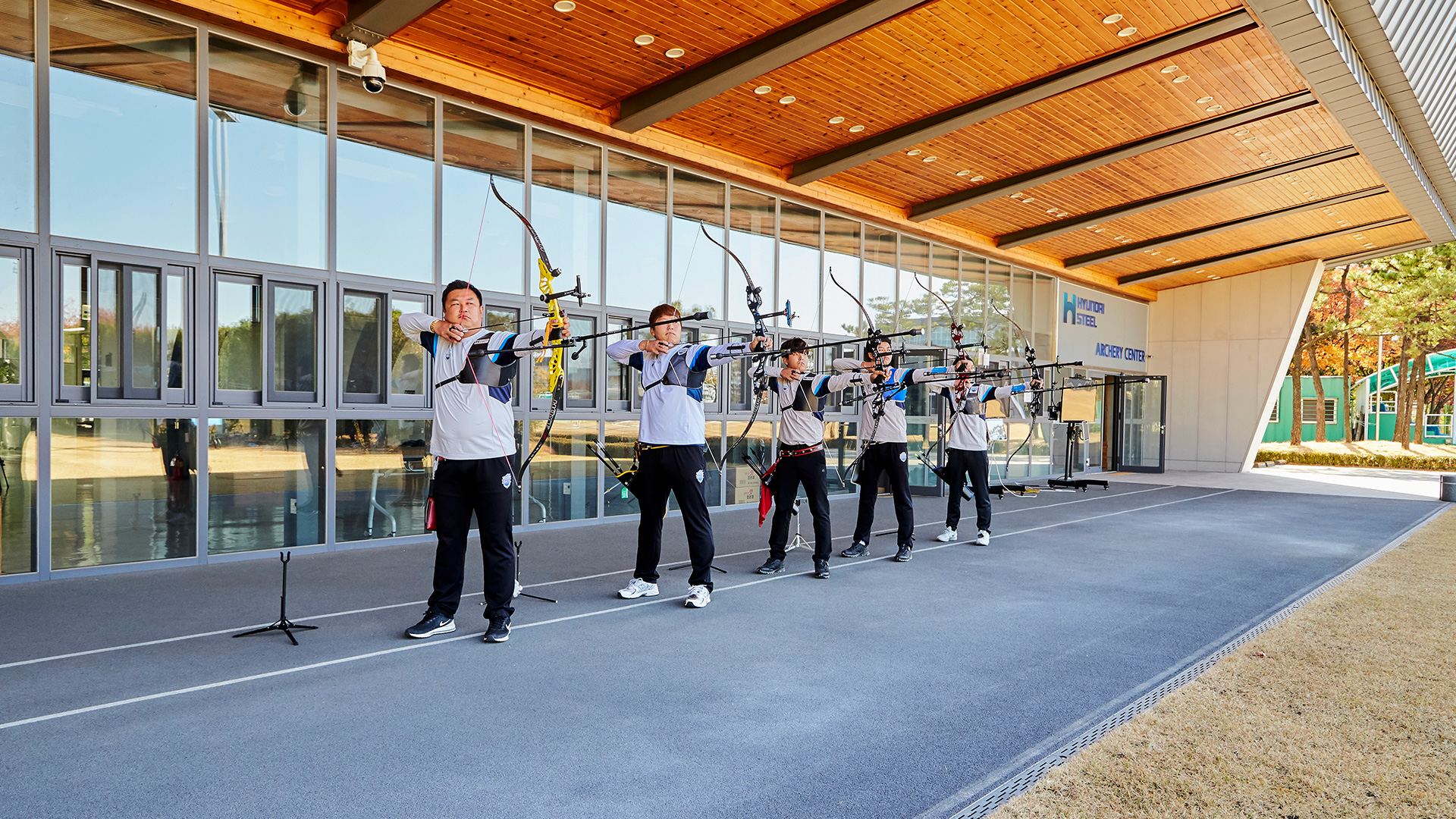 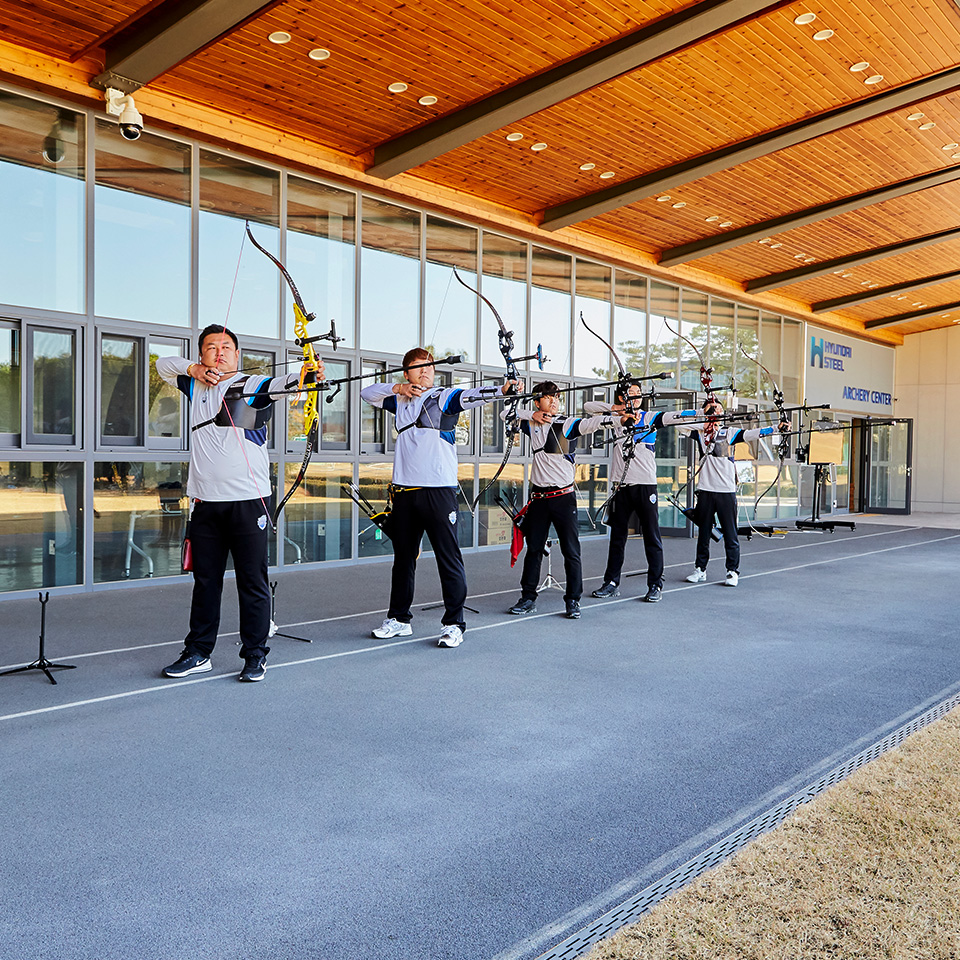 The Korea national archery team had a special moment with the employees of Hyundai Motor Group. Here are their stories behind the Tokyo Games.

“Go go go!” Jaedeok Kim won his first gold medal at the Tokyo 2020 Games on July 24 with a strong spirit. On that day, the Korean national archery team won the gold medal in the mixed team event first, then won the men's and women's team event, and even the women's individual event - based on the teamwork of 'One team, One spirit'. The archery team, which showed its best skills despite difficult times, has a special relationship with Hyundai Motor Group; Hyundai Motor Group has been sponsoring the Korean Archery Association for 37 years since 1985. Thanks to this relationship, the Korean national archery team joined Hyundai Motor Group’s talk show 'The Power of Empathy' held on September 10th along with a welcome party for the team. The athletes and employees met online and chatted freely, and the athletes answered questions during the show. Here's what they talked about at the show.

Q. Ansan, you have realized your dream of becoming a national sports star, just as you said in the interview when you joined the national team for the first time back in 2018. Before the shoot-off, we have seen you choosing your arrows really carefully. How do you choose your last arrow?

Ansan | First of all, I still can't believe it or realize it because my dream came true in such a short time. The last arrow was chosen as carefully as possible. In archery, victory or defeat can be decided by a difference of 1-2mm depending on how inflated the feathers are. I chose the arrow with the white feather that has the most even feather condition.

Q. The heart rate of the players during the match at the Tokyo 2020 Games was broadcasted in real-time. Woojin Kim gained attention with his exceptionally low heart rate. Do you have any secrets to staying focused and calm even in such a tense moment?

Woojin Kim | In Jincheon Athletes' Village, there is a set similar to the set of the Tokyo Games, and I was able to develop my adaptability while training there. Personally, when I play, I try to focus completely on myself rather than my opponent. I don't care what record my opponent sets, I try to do what I've been doing. Also, the secret is to have the belief that you can do it, and not to doubt yourself and the arrows you shoot.

Q. What was your unique effort to get good results in your first attempt at the 2020 Tokyo Games?

Jedeok Kim | In order to join the national team, I practiced steadily, building up my skills, and growing little by little. Thanks to these efforts and results, I was able to participate, so this competition is very meaningful to me. Up until the finals, I had a lot of thoughts. We thought a lot about how to get the best results, but the bottom line was 'Let's do our best and accept the results no matter what. So, rather than winning a medal, I confidently participated in the game by focusing on my dream and the goal of the team. The reason I shouted ‘go go go’ at the stadium was that I wanted to relax myself and at the same time energize the team atmosphere.

Q. You once again proved the power of Korean archery to the world by dominating the archery men's and women's and mixed team competitions. Where does the archery team’s slogan ‘One Team One Spirit’ come from?

Chaeyoung Kang | The Korean archery team is made up of the best players in Korea through a fair match. It seems that the best of the best comes together to build teamwork, which creates even more powerful energy. Of course, this good result is thanks to the support of the Korean Archery Association and its leaders. There were difficult times after the national team selection in Rio, but I learned to play with confidence in myself and overcame the slump with a positive mindset. Since then, my skills have grown even more, and my performance has improved.

Q. I heard that the driving force behind the men's team winning gold medals was the smartphone game. Did the game actually help the team unite?

Jinhyuk Oh | Through the game, we competed with each other and became closer and closer. All the players clearly had goals, and we talked a lot about the goals we wanted to achieve while playing the game. In terms of building relationships and sharing goals, I think playing on the phone was very helpful. Also, the archery team leaders and players all had good results because we all shared the same goal. When I had to suffer a shoulder injury, playing for this team felt so exhilarating that I didn't even feel any pain.

Q. Minhee Jang, you said in an interview that you felt a little pressure when you first joined the national team; and yet you reached out and won the gold medal. How did you manage to enjoy a big stage such as Tokyo Games?

Minhee Jang | There has been a lot of pressure since joining the national team. However, while preparing for this competition, my training went well, and the team performance was good during the competition. I was able to get confident rather than stressed out. And I was very surprised by the help provided by cutting-edge IT technology applied to the training equipment supported by Hyundai Motor Group. The high-precision shooting machine was able to provide more precise player-customized arrows, and the vision-based heart rate monitor was able to increase concentration. We also utilized the score recorder and deep learning vision AI coach that could accumulate data on scores and postures. The player-customized 3D grip was easy to use and it allowed sophisticated adjustments. I was able to further enhance my performance through techniques I had never thought of before playing for the national team.

Jinhyuk Oh | In team selection matches, it is not uncommon for former gold medalists to fail to join the national team. This is because there is a principle that puts aside all the previous results and starts from a blank slate fairly. Because players are selected based on skill alone, there is no controversy about the selection process, and on the contrary, they can compete better with each other. In some cases, players learn each other's strengths and weaknesses through matches and get to absorb others' skills during the competition. I think all of this stems from the principle of fairness.

Q. I was told that Jaedeok Kim could join this Tokyo game for such a fair selection process - how did you feel about this? What was your actual experience like?

Jaedeok Kim | The national archery team is selected every year. However, as the Tokyo Games were postponed by one year, I got one more chance. I thought that as much as I worked hard, good results would come out, so I tried again and again to seize the opportunity. During the national team selection, it felt as if I was changing as the record gradually improve. Looking back on the past, I have gained a lot through the selection process.

Q. Jinhyuk Oh and Chaeyoung Kang are playing for Hyundai Steel and Hyundai Mobis, respectively, of Hyundai Motor Group. I assume this talk show might mean to you more than other players.

Jinhyuk Oh | It was such an honor to join the national archery team as a member of Hyundai Steel. I really appreciate the company's endless support and I was able to do a lot better for this. I hope we made everyone happier in this scorching summer. We will always show you our best performances.

Chaeyoung Kang | Playing on the Tokyo Games stage wouldn't have been possible if it were not for Hyundai Mobis. As an athlete of the Mobis team, I am very proud to represent Korea. Thank you for your support and love.

In addition, as part of the talk show during the Q&A with the players, Archery Team Director Chaesun Park, the men's and women's coaches, and the faculty of the archery team shared their story on the video. Director Park expressed his gratitude to the players, saying, "The training that I did my best made good results in Tokyo." Men's coach Seungjin Hong emphasized that the brotherhood of Jinhyuk Oh, Woojin Kim, and Jaedeok Kim led them to the victory. Sujeong Ryu, director of the women's team, said, "I am grateful to the players who followed the training process that would have been frustrating and difficult due to the COVID-19 without being able to go out of the camp or meet people. They all did really well." Chilseok Song, the women's coach, said he was worried that only one person participating in the mixed team event would discourage the women's team, but he was that that the team will cherish their 9th victory when captain Kang texted him.

They also thanked Hyundai Motor Group for technical support. “Thanks to Hyundai’s technology, we were able to produce good results much more easily,” said Choonghyeon Na, the performance analyst. Referring to the shooting machine, men's coach Jaeheon Jeong said, “it was amazing,” adding that the machine excelled at eliminating bad arrows. Lastly, director Chaesun Park said, “The results of this game were possible not only because the archers did well, but also with the help and support of the Hyundai Motor Group executives; hence everyone deserves to enjoy.”

The talk show ended with everyone cheering and shouting, just like Jaedeok Kim did at the Tokyo Game. The Hyundai Motor Group employees also joined the talk show through online live comments. The archery team shared the stories behind the success of the players and the Archery Association, the secret to their strong companionship that made them the world's strongest team, and also the other behind stories of the Tokyo Games; setting a goal and working tirelessly to achieve it will definitely pay off.

Through conversations with the archery team, Hyundai Motor Group employees could grasp the concept of challenges and a firm sense of success. In addition, they shared a common DNA with the archery team in terms of innovation, challenges, and thorough preparation for changes. Hyundai Motor Group will continue to strive to provide employees with experiences to satisfy their needs and interests in various ways, such as this talk show. In addition, they will continue to provide unlimited support for Korean archery to maintain its world champion position. Let's look forward to the future of the archery team and Hyundai Motor Group, which are constantly innovating and aiming for the best. 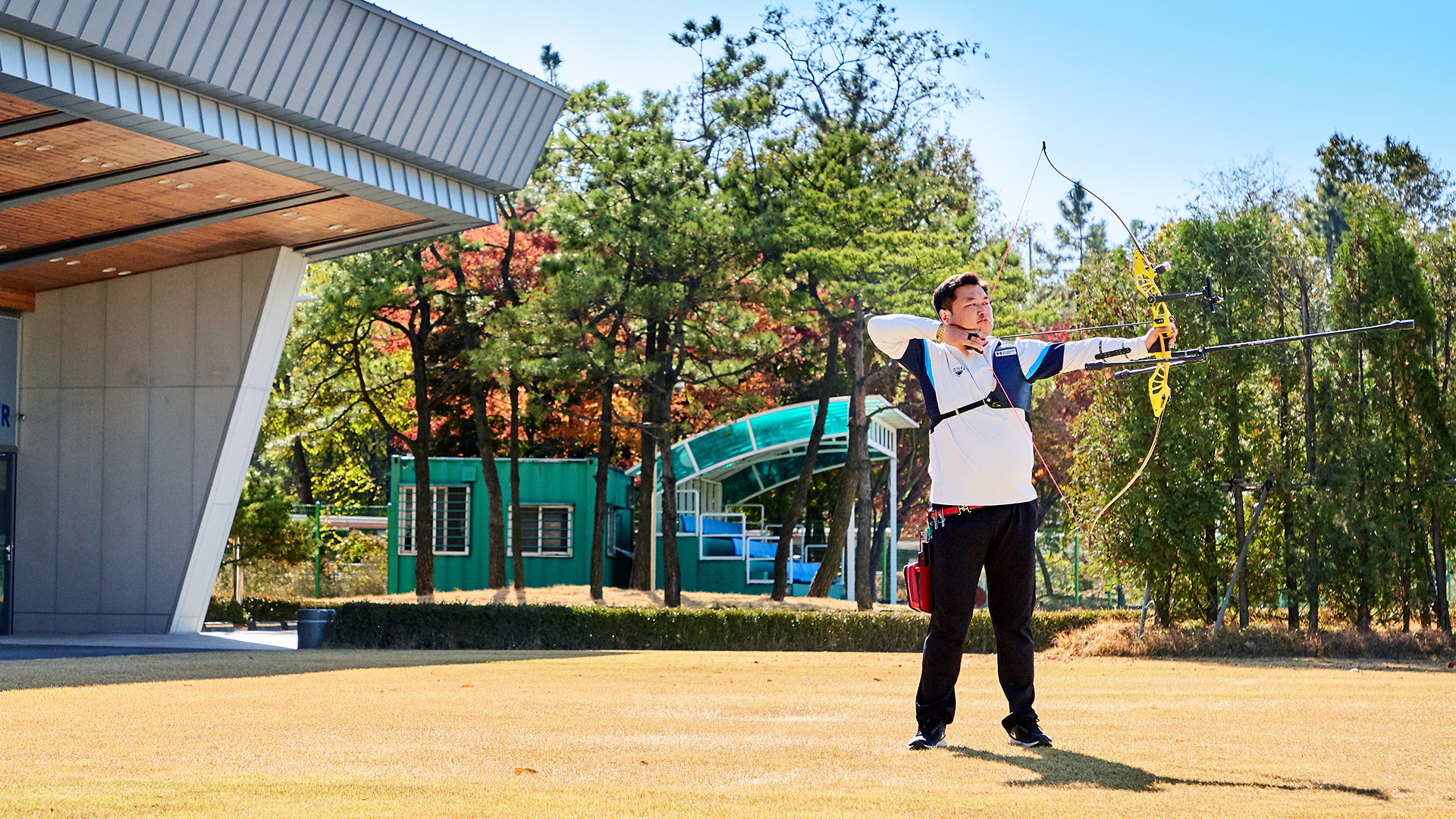 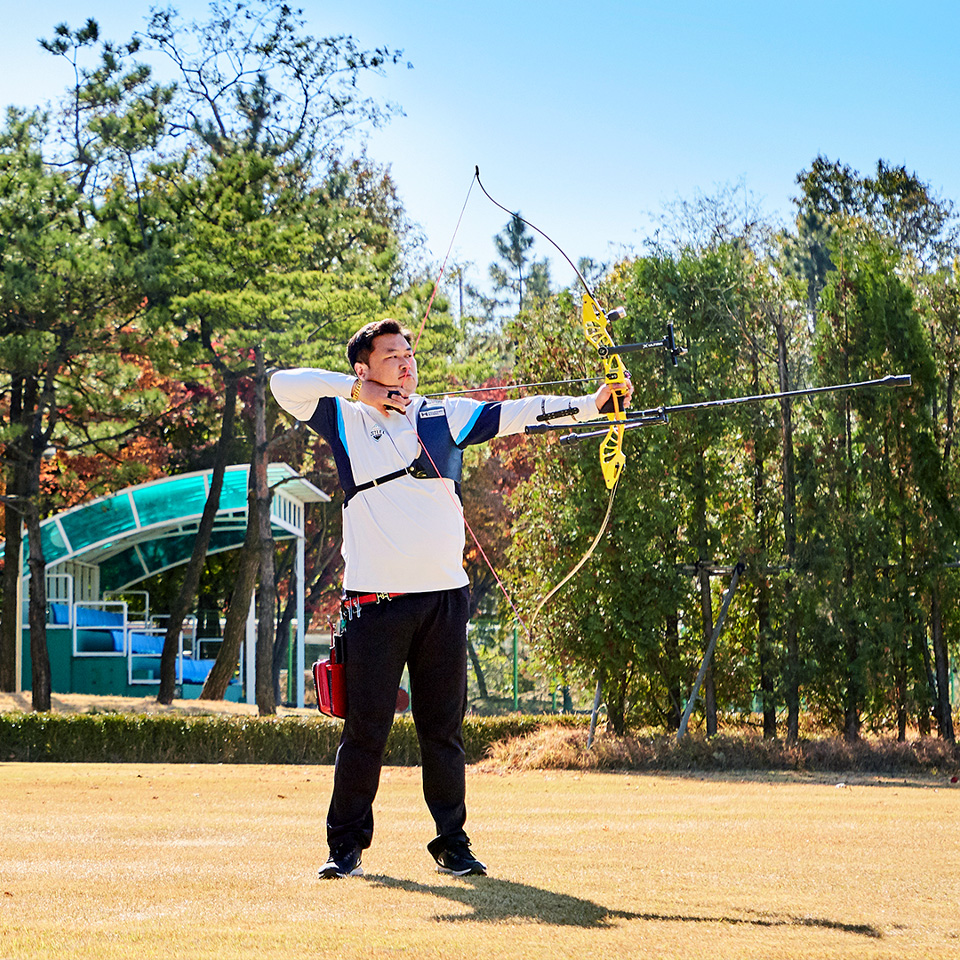