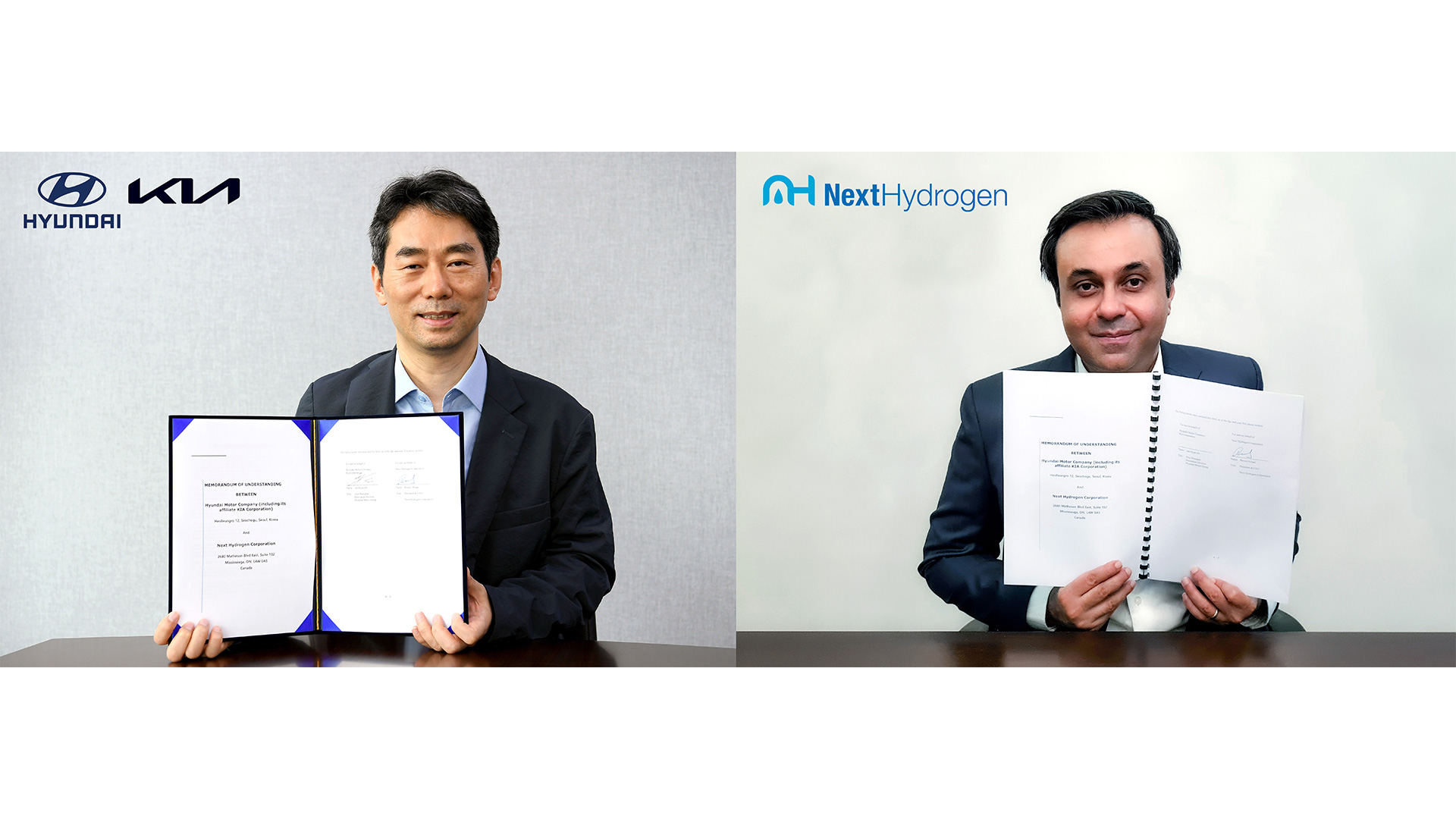 - The companies aim to develop a more efficient stack for the system, and explore potential technological applications and commercial arrangements in the future

SEOUL/TORONTO, July 8, 2021 - Hyundai Motor Company and Kia Corporation have signed a memorandum of understanding with Next Hydrogen Corporation, a Canadian company specializing in water electrolysis technology and a subsidiary of Next Hydrogen Solutions Inc., bolstering their efforts to usher in a global hydrogen society through cost-effective production of clean hydrogen.

Under the agreement, the companies will jointly develop an alkaline water electrolysis system* and its related stack for the purpose of generating green hydrogen economically and exploring new business opportunities and technological applications.

Among the various methods of water electrolysis, the alkaline water electrolysis system is regarded as technologically one of the most rigorously tested and proven means with a long track record of research and development. Also, it has the advantage of being able to produce large-scale hydrogen and using relatively inexpensive catalysts, making facility costs low.

The aim is to advance stack-related technologies that are at the core of the alkaline water electrolysis system to reduce the cost of building the system and maintaining/operating the system. The key benefit to be derived from the project is that by enhancing the performance of stack-related technologies in the alkaline water electrolysis process, it will be possible to develop a new stack which can be operated at high current density*  and produce green hydrogen economically.

The newly developed stack will use Hyundai Motor and Kia’s component technology related to electrodes, bipolar plates and current collectors, combined with Next Hydrogen’s design technology. Hyundai Motor and Kia will also oversee the test performance of the new stack. A pilot test is planned for next year, and the companies will also explore potential technological applications and commercial arrangements.

“We are pleased to partner with Next Hydrogen specializing in state-of-the-art water electrolysis technology. This partnership is another leap forward for our hydrogen business and will be our first step into the alkaline water electrolysis market,” said Jae-Hyuk Oh, Vice President and Head of Energy Business Development Group at Hyundai Motor Group. “We believe our technology will be an excellent match for Next Hydrogen's technology, and this synergy will help achieve our goal to provide our customers with cost-effective green hydrogen.”

“Next Hydrogen’s innovative water electrolysis stack design technology is an ideal solution for enabling the economical production of green hydrogen,” said Raveel Afzaal, President and CEO of Next Hydrogen. “We are extremely appreciative of the opportunity to work with Hyundai Motor and Kia, given their industry leadership as champions of this technology. This partnership is expected to accelerate efforts to address the incredible emerging opportunities in sustainable transportation globally.”

Among the varieties of hydrogen produced by different methods, the conveniently called “green” hydrogen is one of the cleanest varieties, generating zero carbon emissions, as it is produced using water electrolysis powered by renewable energies such as offshore wind. Hailed as the “fuel of the future” for its eco-friendliness, green hydrogen has the potential to revolutionize the world’s industrial and transport sectors.

Due to high production costs, many hydrogen companies around the world are researching ways to advance their water electrolysis technologies for producing green hydrogen more economically. This common goal has brought Hyundai Motor Group and Next Hydrogen together to develop the technology as a more cost-efficient solution.

Hyundai Motor Group, the parent of Hyundai Motor and Kia, has recently introduced ‘HTWO’, a new brand representing the Group’s world-leading hydrogen fuel cell system. The Group is stepping up its efforts to develop a next-generation hydrogen fuel cell system that can be applied to various forms of mobility such as urban air mobility (UAM), automobiles, vessels and trains and beyond.