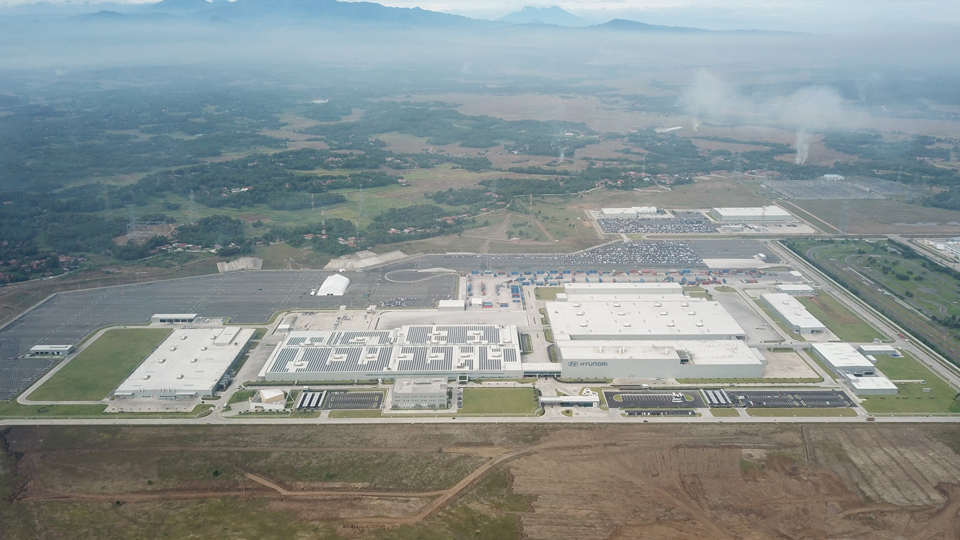 The inauguration follows Hyundai’s signing of a Memorandum of Understanding (MOU) with the Indonesian government to build and operate a local manufacturing plant that will become Hyundai’s manufacturing center for Southeast Asian markets.

Hyundai Motor Manufacturing Indonesia exemplifies the company’s commitment to sustainable development and vision of ‘Progress for Humanity.’ This can be seen in the use of environmentally friendly technologies, such as solar panels that can meet part of the plant’s electrical needs. In addition, Hyundai plans to use environmentally friendly water-based paints in the vehicle painting process.

"Today, I inaugurate and launch Hyundai Motor Manufacturing Indonesia's plant and the first IONIQ 5 electric car produced in Indonesia," said Joko Widodo, President of the Republic of Indonesia. "I hope that this IONIQ 5 from Hyundai will become an important milestone in the development of Indonesia's electric vehicle ecosystem, and to further accelerate the electric car ecosystem that is more advance."

“Indonesia is a key hub for Hyundai Motor’s future mobility strategy. This plant will play a key role in the automotive industry and specifically in the field of electric vehicles,” said Chung, Executive Chair of Hyundai Motor Group. “Moreover, Hyundai will keep contributing to the establishment of the electric vehicle ecosystem in Indonesia through the battery cell plant currently under construction. This will further help support Indonesia to play an important role in the global landscape. We hope Hyundai’s future technologies will be the foundation of greater collaboration with Indonesia.”

Building on Hyundai’s Long-term Commitment to EVs in Indonesia

Indonesia Government is spearheading expansion of EV ecosystem with its measures including converting 130,000 units of government vehicles to EVs by 2030. Hyundai Motor is committed to helping to support this vision to build a robust EV ecosystem.

Hyundai’s new plant will not only produce strategic model for the region such as CRETA SUV but also competitive EV models such as IONIQ 5 battery electric vehicle (BEV).

The IONIQ 5 is Hyundai’s first dedicated BEV model produced in Southeast Asia. The introduction of IONIQ 5 will not only reinforce Hyundai’s position as an EV pioneer in the Indonesian market.

Hyundai will build on positive EV sales momentum in Indonesia made earlier by IONIQ Electric and KONA Electric, which accounted for 87.3 percent of total EV sales in Indonesia in 2021. IONIQ 5 vehicles will be provided for the G20 Bali Summit along with the Genesis G80 Electrified.

Moreover, the company is also working with LG Energy Solutions to build a battery cell factory in Karawang, Indonesia, targeted for completion in the first half of 2023 and starting production in 2024.

The battery cell produced from the factory will support Indonesia’s EV transition with supply of sustainable EV batteries. The locally produced batteries will be sourced to produce EV models in the Indonesian plant, further enhancing EV models’ price competitiveness.

Going forward, Hyundai will produce Santa Fe SUV model in the first half of 2022 and a small strategic MPV model for the Southeast Asian market in the second half of 2022 at the new Indonesian manufacturing plant.

Hyundai as a Game-changer in the Indonesian Automotive Industry

Establishing a vehicle manufacturing plant in Indonesia reflects Hyundai’s commitment to bringing game-changing innovations to the country in terms of products and services. Hyundai has 100 dealerships located across 40 cities throughout Indonesia, from Sumatra to Papua.

Hyundai aims to develop strategic models catering to the local markets’ needs. Furthermore, Hyundai is working towards growing and developing together with its local partners in Indonesia by organizing training activities to exchange knowledge and technology. The efforts reflect Hyundai’s commitment to growing together with Indonesia as well as consistently offering quality products.

Hyundai will also take a customer-centered approach in terms of production and sales. Vehicles will be offered on a build-to-order (BTO) scheme, allowing customers to choose product specifications when ordering them and lowering inventory costs.

Hyundai’s Click-to-Buy online platform enables customers to carry out all stages of the vehicle purchase experiences from their home. Also, myHyundai Indonesia, a unique mobility membership platform, has been presented to support the daily lifestyle of Hyundai vehicle owners.