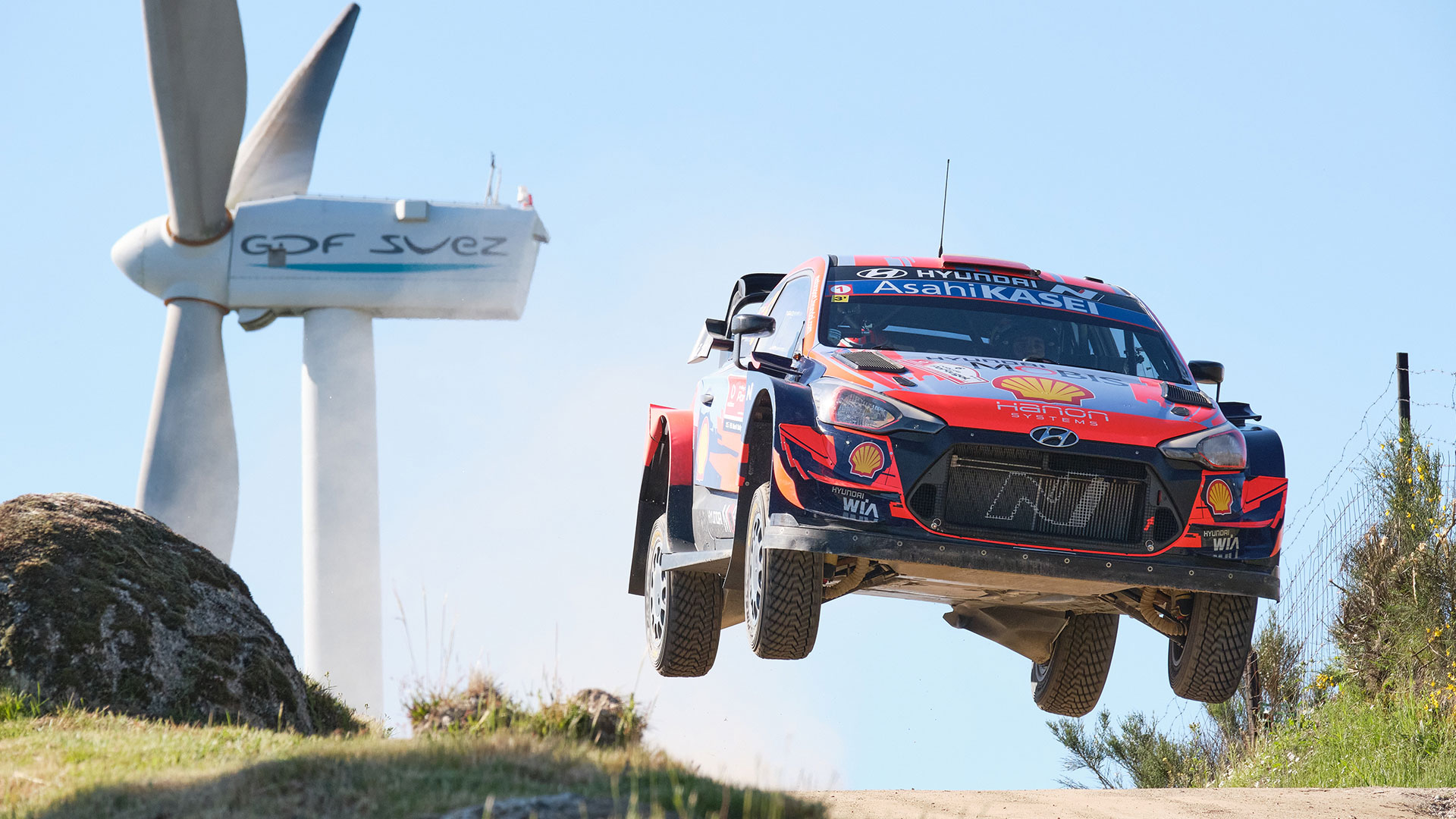 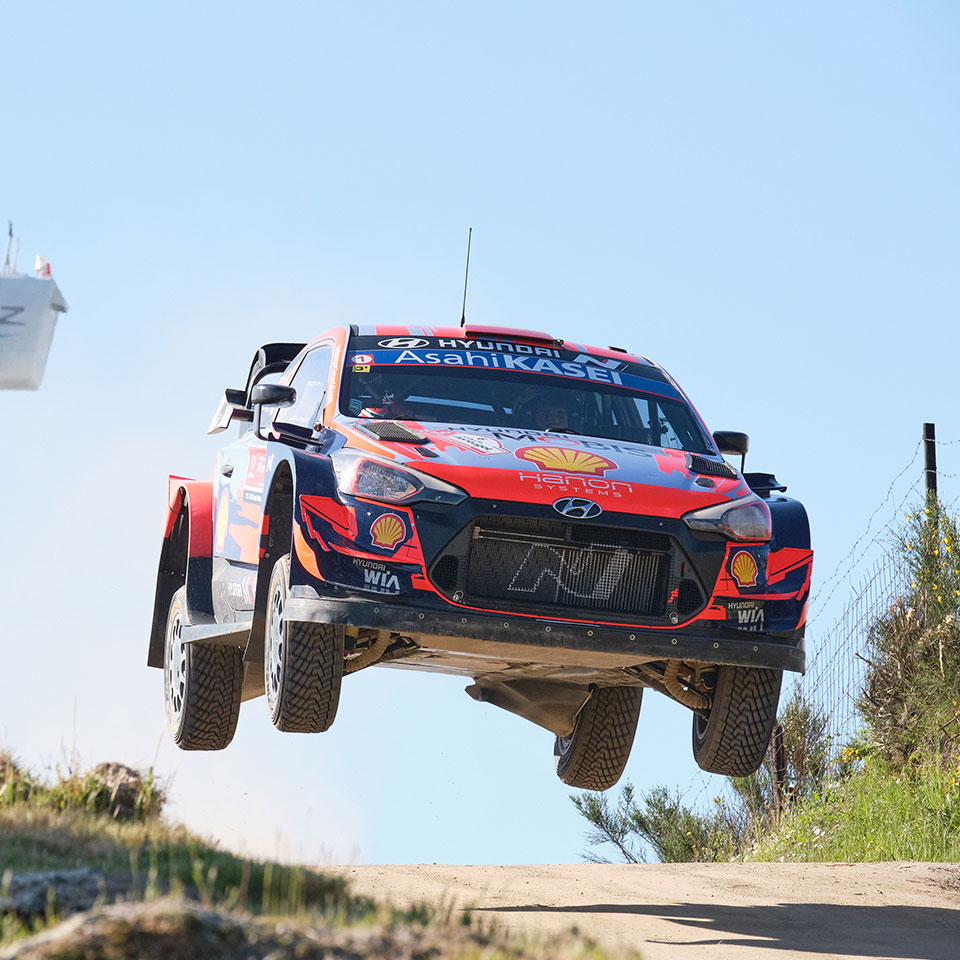 Dani Sordo of Hyundai Motorsport GmbH finished second in Rally Portugal, the first gravel event of the 2021 season. Rally de Portugal is the starting point of the WRC schedule, where gravel is every corner.

After finishing Rallye Monaco with tarmac and snow, Finnish Arctic Rally covered only with snow, and the newly created Croatian tarmac rally, Rally de Portugal was held on May 20-23. Portugal Rally was held two years after being canceled last year due to the Covid-19. Rally de Portugal, first held in 1967, is a historic event that has been with WRC since its beginning in 1973. Although it was briefly absent from the WRC scheduler in the 2000s, it is still famous for its long history and crowd enthusiasm. The Southern Algarve course, which was not very popular until 2014, also returned in 2015. Rally headquarters will be located in Matosinhos, near Porto, Portugal's second-biggest city and port.

Portugal is notorious for being tricky. A layer of soft sand and gravel over a hard, rough stone keeps its grip characteristics changing. Two new stages have been added to the fast and technical gravel roads.

Pirelli, the sole tire supplier, provided a new gravel tire - Scorpion XK - this time. Although many tests have been conducted since last year, actual data are still lacking. Moreover, only 8 soft tires are provided unlike hard tires, so the teams had to be careful when choosing tires.

The Hyundai team took Dani Sordo in the third car after Neuville and Tanak. Neuville was closely following Ogier in second place in the championship, and Tanak, who retired in the opening game, also joined the championship race by winning the second round of the Arctic Rally.

Neuville's co-driver replacement, which took place just before the season began, drew quite a lot of attention; but Sordo also paired up with a new co-driver. Returning almost four months since the WRC Rallye Monte Carlo, Sordo took in Borja Rozada as his new co-driver instead of Carlos del Barrio. Rozada and Sordo are both Spanish, and Rozada is a veteran who won the 2012 PWRC Championship with Benito Guerra. Still, he has his own weakness: he does not have a lot of experiences other than Spanish rallies.

The round's ceremony starts on the night of Thursday, May 20, in Coimbra, central Portugal. And on the morning of the 21st, the race started in the nearby mountainous terrain. The total length of the eight stages of SS1 to SS8 is 122.88 km. On the first day of the match, most of the top players used soft tires and loaded hard tires as spares. The fastest in the opening stage was Tanak of Hyundai, followed by Sordo and Neuville. In SS2 and SS3, Sordo took the lead with the top. Sordo, who only participates in part of the season, has an advantage in terms of starting order; This is because it is disadvantageous to start first on a road full of gravel or sand. Sordo held the lead until the afternoon SS5 and worked well with his co-driver. Until the morning, the three of the Hyundai team were in the top three. Pierre-Louis Loubet of the Hyundai C2 Competition went off the road in SS2 and retired, while Green Smith of the Ford team lost time in SS3 due to a tire puncture and was pushed out of the lead.

Starting with SS7, there was a change in the rankings. SS7 Mortagua is the stage that returned to WRC after 20 years. Neuville took a left-hander too soon, sliding out and crashing into a wall. This broke the right rear tire and he could not finish the race. Sordo also retreated to 3rd place due to the engine shutting off at the hairpin and severe tire wear. While his teammates struggled, Tanak took the lead.

All of this was due to Portugal's dry climate: a broken suspension caused the Neuville to run slowly and generate a lot of dust, which left Toyota's Evans almost blind. He also could not continue driving and wasted about 40 seconds. Lucky for him, however, he was given notional time (in case of emergency, the organizer replaces the record with those in normal condition - judged by split time, etc.) and was able to go up to second place.

Super Special Stage took place on Friday at the Rallycross RX Lousada. The way the two cars are set off side by side made the participants nervous and drove the audience crazy because the differences in the records become so obvious. Despite Covid-19, many gathered to enjoy Rally de Portugal after a long break. Starting side-by-side with Evans, Tanak held the lead by finishing Friday with the fastest record at SS8; he was 6 seconds behind Evans in second. Sordo was in third place, while Toyota's Takamoto Katsuta, Sebastien Ogier, and Kalle Rovanpera looked for a chance to lead from fourth to sixth. Oliver Solberg of Hyundai, who entered the WRC2 class, marked 12th.

On Saturday, May 22, the drivers repeated three courses at the Cabrera Mountains, northeast of Matosinhos, before returning to Porto to finish on a short stage. The total length of the seven stages from SS9 to SS15 was 165.17 km. The 37.92 km-long course Amarante, which houses SS11 and SS14, was the longest in this rally. SS15 is a 3.3km-long stage that takes three laps around the 16th-century Forte de Sao Joao Baptista.

In the opening SS9, Tanak was the fastest with a record of 24 minutes and 11.9 seconds. After that, in SS10 and SS11, Tanak, Evans, and Sordo took 1st to 3rd place, respectively. Despite Evans' relentless pursuit, Tanak kept widening his distance with multiple fastest records. After finishing the morning race, the difference from second place Evans was 19.2 seconds. Sordo is chasing from third place despite his soft tires' worrisome condition. Neuville, who had to give up on the points finish, decided to save his soft tires and aim for the power stage on Sunday instead. In the afternoon at SS13, Tanak recorded his 250th WRC stage win, widening the gap between Evans by 22.4 seconds.

Still, the Hyundai team's misfortunes were not over yet. At 34.1 km of the longest SS14 Amarante, Tanak's car stopped after the right rear suspension broke, making Evans lead. Now, the only hope left for the Hyundai team was Sordo. Sordo returned to Porto and reduced the gap between Evans to 10.7 seconds at SS15. Toyota's Rovanpera also retired after finishing SS13. Ogier battled hard for third place with his teammate katsuta.

On Sunday, the final match was played in five stages of 49.47 km. Drivers ran two laps each on the opening stages of Felgueiras (9.18 km) and Fafe (11.18 km), and one lap in SS17. The final SS20, which is also the Power Stage, takes place in Fafe again. Fafe is a legendary stage that was born with the start of Rally de Portugal in 1973. Although it is not very long, it boasts a wonderful view of wind turbines lined up on a vast hillside. In particular, the area around Pedra Sentada Jump at the end of the course makes the best scenery.

Evans recorded the best time and conquered the opening stage SS16, and also dominated SS17 and SS19, widening the gap with Sordo. Sordo, on the other hand, lost power by being 9.6 seconds behind Evans on the opening stage. Now all that was left was the 11.18 km-long SS20. Tanak recorded the best time, Neuville took second place, and Ozier, Robanfera, and Evans took extra points.

Ogier defeated Katsuta to finish third and led the championship with the most points. With this win, Evans, who had 26 points (25+1), defeated Neuville and moved up to second place in the Championship. This places Neuville in third and Tanak in fourth. In the manufacturer's points, Toyota recorded a double podium with 183 points, and the Hyundai team made 146 points by taking first and second place in the power stage. The teams then will leave Portugal and move to Italy for the 5th round in Sardinia on June 3-6. Fierce battles await under the scorching summer sun on the rough roads. 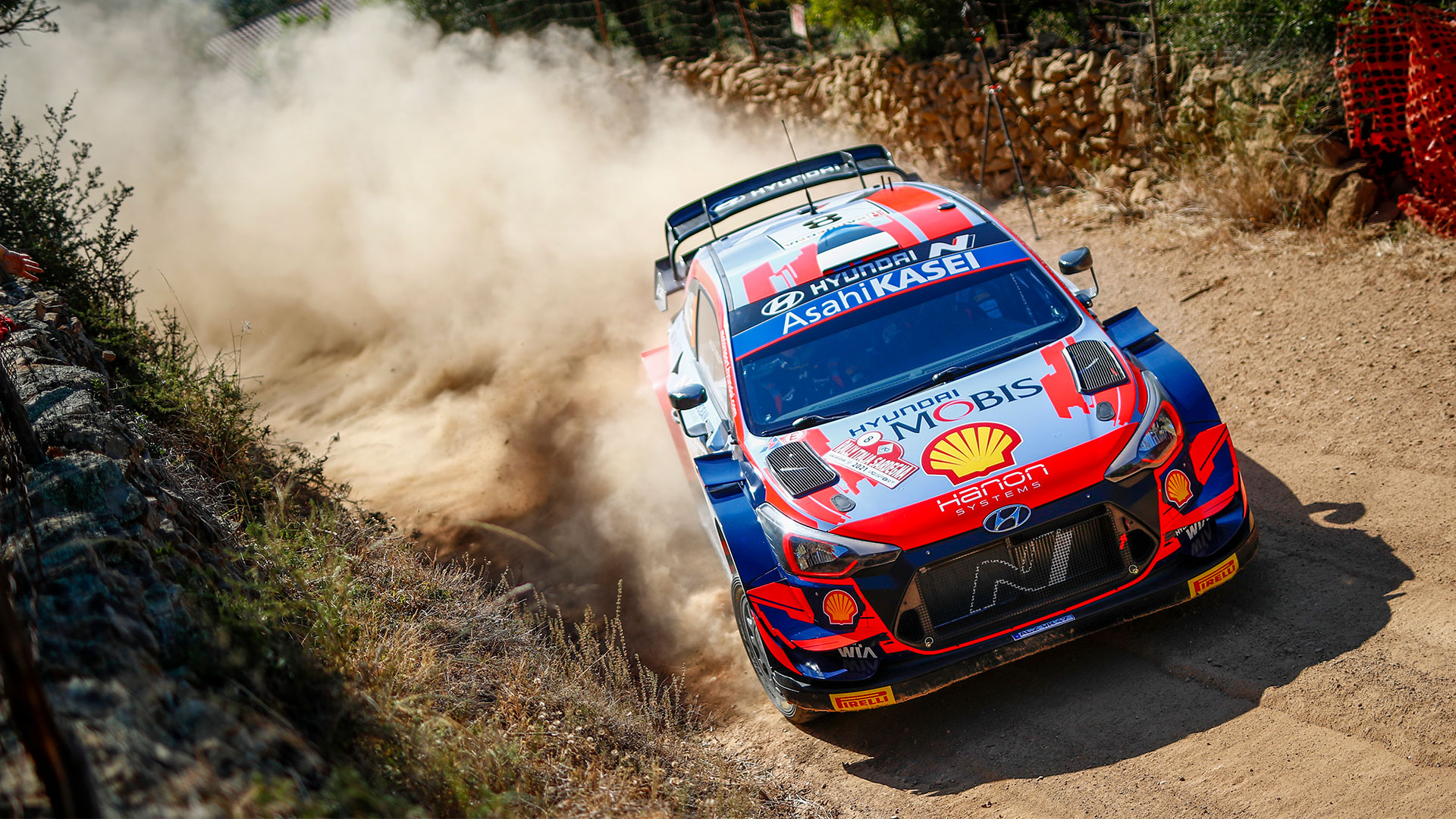 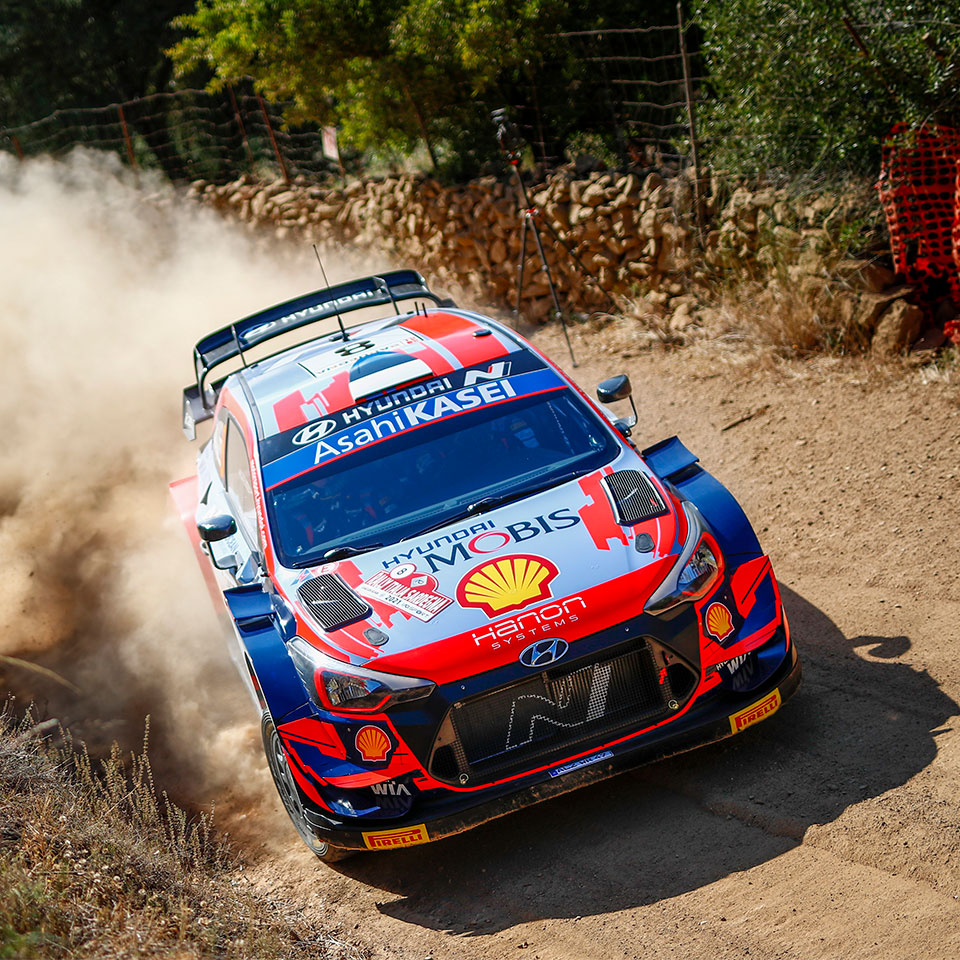