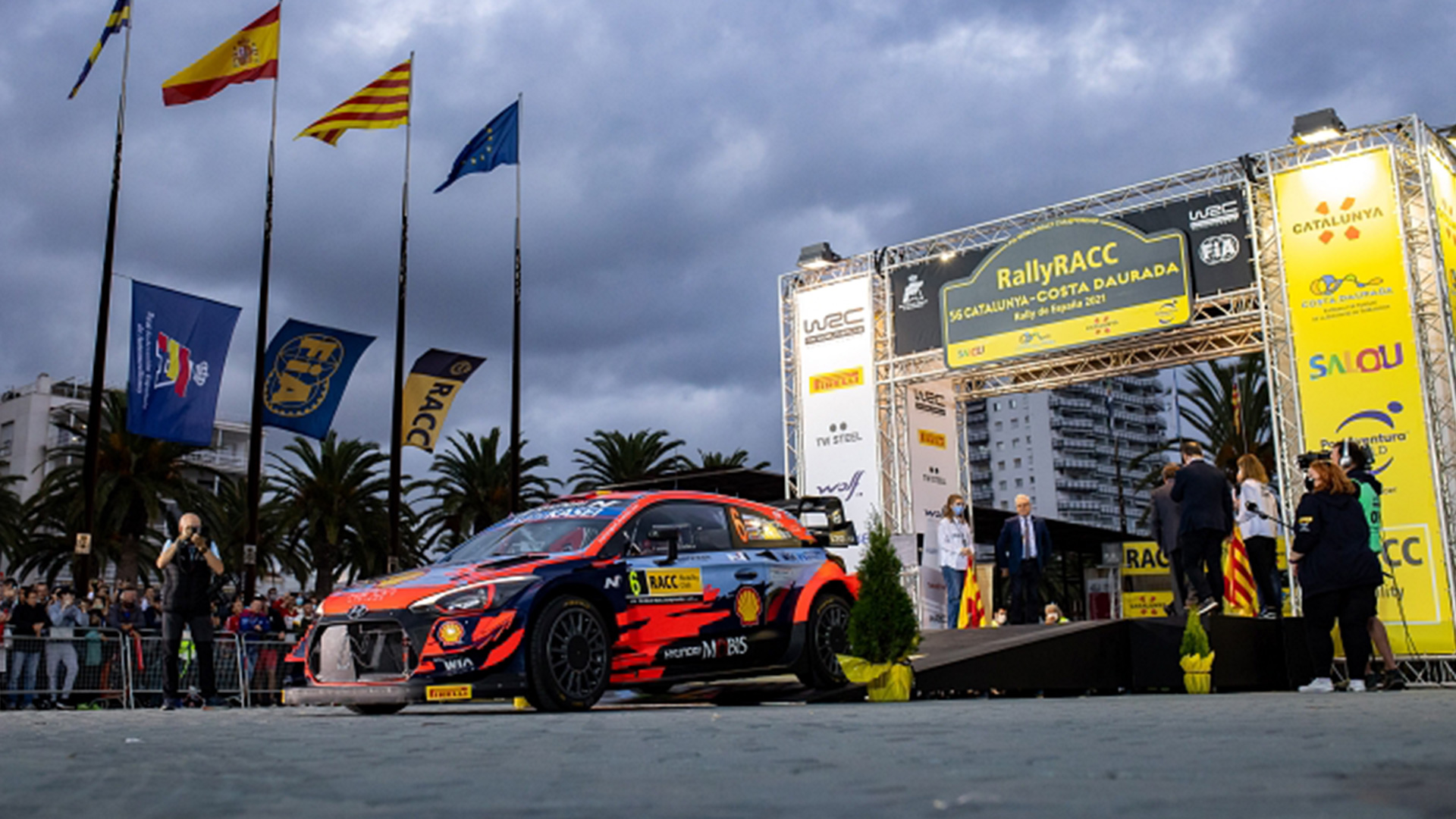 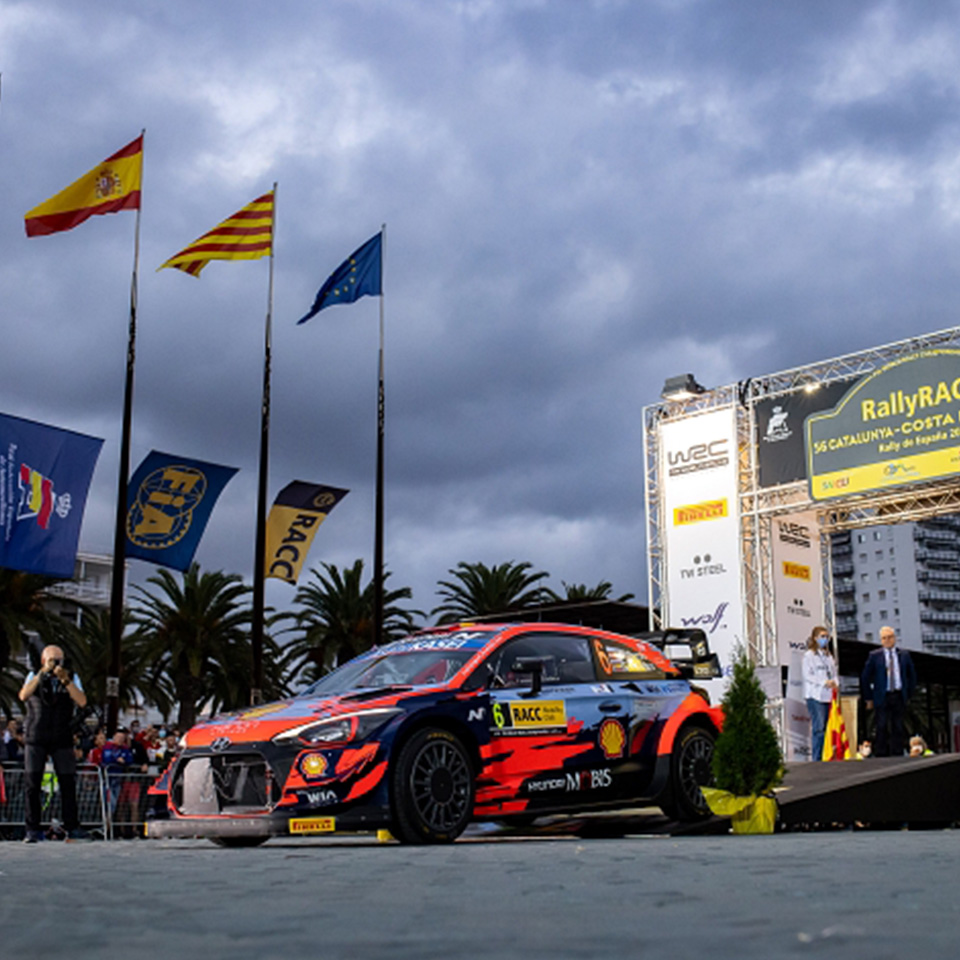 Rally Spain is also called Rally Catalunya. What sets this rally apart is that it's the only course in WRC with a mix of gravel and tarmac. In other rallies, drivers sometimes drive on different surfaces for a while, but in Spain, the car runs on gravel on the first day, and the rest on a tarmac. Thanks to this, it has become a unique event in Spain for participants to completely replace the suspension, damper, and drivetrain for the tarmac after the first day. However, due to the pandemic, the WRC year will be full of tarmac rallies; Historically, Rally Spain was 100% tarmac between 2002 and 2009.

Rally Spain, which started in 1957 and became part of the European Rally Championship (ERC) in 1975, has become a part of the WRC in 1991. The driver who won the most in this race was Sebastien Loeb, who conquered the 2005-2012 seasons. Among the current racers, Sebastien Ogier of the Toyota Team has won the championship title three times. Hyundai Team's Thierry Neuville took the cup at the most recent Rally Spain, in 2019 - which was once suspended last year due to the pandemic. At the podium in 2019, there were Ott Tanak of Toyota back then, and Dani Sordo of Hyundai. These three are driving for Hyundai in Spain this year.

For Hyundai, Rally Spain 2019 remains pleasant. At that time, the Hyundai Team, which achieved a double podium thanks to the performances of Neuville and Sordo, beat Toyota in second by 18 points, raising the chance of winning the manufacturer's title right before the final rally of the season. Above all, Rally Australia, which was supposed to be the last one, got canceled due to forest fires; and the Hyundai team won the first manufacturer's title since joining the WRC.

After two years, Rally Spain revived and was held in Salou- a beautiful port city and resort in Catalonia, still facing the beautiful Mediterranean. Service Park is located right next to PortAventura World theme park, one of the tourist attractions in Salou.

Tarmac Rally, where competition for great speed takes place, is not much different from circuit racing. Efficient corner cuts will shorten your record, but driving too aggressively can scratch the edge of the road and cause the tire to burst. Also, since cars running ahead scrape up dirt and gravel around corners, the more you start from the back in the afternoon, the worse you have to drive. Smooth asphalt also causes a tire to wear. For this game, Pirelli prepared a new hard compound tire P Zero RA WRC HA for Tarmac.

The Hyundai Team put in a whopping five World Rally Cars, including the Hyundai C2 Competition Team. Defending the Driver's Champion and Manufacturer's titles has become virtually difficult. However, Neuville, Tanak, and the Spanish Dani Sordo who came to drive in his own country, were aiming for a double podium.

Oliver Solberg, who will ride Hyundai Team's third car next year, participated in the Hyundai C2 Competition Team and took his first step in the WRC Tarmac Rally with a World Rally Car. The other car was driven by Spanish ERC driver Nil Solans, who was urgently hired after Pierre-Louis Loubet got into a car accident. Jari Huttunen and Teemu Suninen drove the two i20 N Rally 2s in the WRC2 class. Suninen, who left the M-Sports Ford team earlier this year, has yet to reveal specific plans for next year.

Ogier, Elfyn Evans, Kalle Rovanpera, and Takamoto Katsuta were driving for Toyota, which got closer to the championship title after winning Rally Finland. Ogier is aiming for his eighth Drivers' Championship title, and making a six-point gap with Evans in this match will give him the title.

Gus Greensmith and Adrien Fourmaux were for the Ford team. Greensmith announced his farewell with his co-driver, Chris Patterson, after the round. It's Fourmaux's first time with a World Rally Car to participate in Rally Spain.

On Thursday, October 14th, a shakedown was held in the morning at the 4.31km-long Coll de la Teixeta stage. Colo de la Tiexeta, not far from the Service Park, is actually a cut-off section of the final stage. This includes the famous circular rotary. Afterward, the racers returned to Salau Coast to hold the opening ceremony.

The participants, who moved northwest early on Friday morning, started the game on the Costa Daurada hill. And they had to go through the 112.02km SS1~SS6 running through three stages repeatedly. Riba-roja of SS3 and SS6 is 14.21km, the shortest course on Friday, but it is a difficult stage that goes up and down the mountain through endless hairpin corners. Unlike Vilaplana and Riva-Rosa, which have been closed for over 10 years, the 21.8km-long La Granadella that takes the long SS2 and SS5 is a completely new stage. It starts with a gentle high-speed section in the beginning and continues into a violent winding in the second half.

At the beginning of the game, understeer due to the new tires bothered many participants. Evans, who was the first to adapt, took the overall lead in the 20km-long opening stage Villa Plana. Neuville chased Evans hard and finally became his tie player in SS2 (11:46), but by the end of SS3, he was only 7.9 seconds behind. Katsuta hit the guard rail from SS1 and his left front part was devastated.

The drivers were serviced and returned to the afternoon session. Neuville escaped the understeer that haunted him all morning - thanks to a change in the suspension setup. He took the lead by marking three consecutive top times. In SS5 La Granadella, it was 7.9 seconds faster than Evans. Tanak swerved off a high-speed corner in SS4 and collided with a tree, which was severely damaged and retired. After an intense speed competition, Neuville finished Friday with the overall lead. The time difference with Evans is only 0.7 seconds. Sordo, who was 5.4 seconds behind third-placed Ogier, was looking for an opportunity. Robanfera is fifth. Formaux, Greensmith, Solberg, and Solans are in sixth to ninth place, respectively.

On Saturday the drivers went through the 117.54km-long 7 stages from SS7 to SS13 northeast of Salou. Querol-Les Pobles of SS8 and SS11 is a course with a new composition although some sections overlap with the previous ones. Participants returned to Salou in the evening and finished the day at the 2.24km short-distance stage SS13 in front of the beach. The coastal road, which was full of people, was slippery with sand blown from the white sandy beach.

Neuville's sprint, which gained momentum on Friday, did not stop on Saturday. Neuville, who started the morning refreshed with SS7 Top Time, took 4 stages in a row until SS10, widening the distance from the drivers behind him. The gap with Evans in second place is 11.1 seconds. On the other hand, Evans tried to adjust the setting for the uneven road surface but ended up losing the balance. In the afternoon, Ogier desperately ran away from the Sordo behind him, thanks to the top times in SS11 and SS12. However, when the engine was turned off at the SS13 hairpin corner, the gap between the two was narrowed down to 1.2 seconds again.

At the end of Saturday, Neuville maintained the overall lead with a top time through SS13. And Evans was 16.4 seconds away from him; he was followed by Ogier, Sordo, Rovanpera, Greensmith, Solberg, and Solans. Formaux, who was chasing Rovanpera by 30 seconds or so, suffered tire and suspension damage in SS11 and was unable to score for the team. Solberg soared to 6th this time, but a clutch problem caught him and allowed Greensmith to overtake at the last minute.

On Sunday, October 17th, the final round at SS14-SS17 50.9km began with two repetitions: the 9.1km-long Santa Marina and the 16.35km-long Riudecanyes. At 7 o'clock in the morning when it was still dark, the participants left the Santa Marina stage and continued on to the Riudecanyes. The 360° drift section of the roundabout, located about 4km from the starting line, is the hot spot where the largest crowds gather in Rally Spain.

Sordo showed amazing concentration at the last minute as if he was trying to respond to his fans in the home country. Sordo, who recorded the top time at SS14, the opening stage on Sunday, finally overtook Ogier and soared to third place. Sordo's dominance continued until SS17 Riodiscanyes, the final/power stage of Rally Spain. Neuville also finished second on all courses on the last day except for SS16, widening the gap with Evans.

In the end, Neuville became the last winner of the Spanish Rally, winning the Spanish Rally for the second time in a row. Evans came in 24.1 seconds behind him. The Hyundai team achieved a double podium as Sordo finished third with a 6.8-second gap with Ogier. It was the second consecutive double podium since Rally Spain in 2019. In addition, Sordo and Neuville earned five and four additional points in the final power stage, respectively. Ogier, Robanfera, Greensmith, Solberg, Solans, and WRC2's Eric Camilli and Nikolay Gryazin also scored for their team.

Hyundai team succeeded in scoring 49 points in this rally in Spain, narrowing the gap with the Toyota team to 47 points. However, with only one round left, it seems difficult to make things change. However, WRC fans have reason to look forward to the final round, the Italian Monza Rally, which will be held on November 18-21. It was unclear who would win the Drivers' Championship as Evans had seven more points than Ogier in Rally Spain. Currently, the difference between Ogier and Evans is 17 points, so even if Evans wins 1st in Monza Rally, Ogier will still become the champion regardless of power stage points unless he doesn't make the top three at the rally. There are still many things to take into account - such as Ogier's own performance, the Hyundai team's performance, or the power stage.

For reference, there were several important announcements for the 2022 season before and after Rally Spain. First of all, Hyundai decided to give Dani Sordo and Oliver Solberg their third car, while making Neuville and Tanak stay in the first and the second seat. Speaking of which, Solberg, born in 2001 in Sweden, went through harsh education from an early age from his world-champion father, Peter Solberg (2003 WRC champion). Solberg, who joined Hyundai at the end of last year and participated in the WRC2 class, has been working hard to adapt to the World Rally Car in his spare time. Accordingly, next season, Neuville, Tanak, and Sordo and Solberg will be driving Hyundai cars. Craig Breen, who wanted to drive for the full season, left Hyundai and joined the Ford team. Breen will take over Greensmith's place, and Adrian Formaux will take the rest of the car.

The Toyota team has decided to hire Esapekka Lappi since Ogier wanted to try other activities other than WRC instead of participating in the full season. Elfyn Evans and Kalle Rovanpera will be in the first and the second car, and Ogier and Lappi in the third - just like Hyundai is doing. It is unclear which rally Ogier will be joining.

Excited about the 1991 establishment of the first domestic auto mania magazine 〈Car Vision〉, I sent a series of long letters there that led to an unexpected hire. 27 years have passed since then, the years of plowing through the writing struggles of an auto journalist. After becoming an editor and the Editor-in-Chief for 〈Car Life〉 and 〈Car Vision〉, I have started a new career as an automobile critic. My recent interests include cutting-edge techs like electric cars, connected cars, and autonomous driving, but the ‘otaku’ in me doesn’t want internal combustion engines to disappear either. 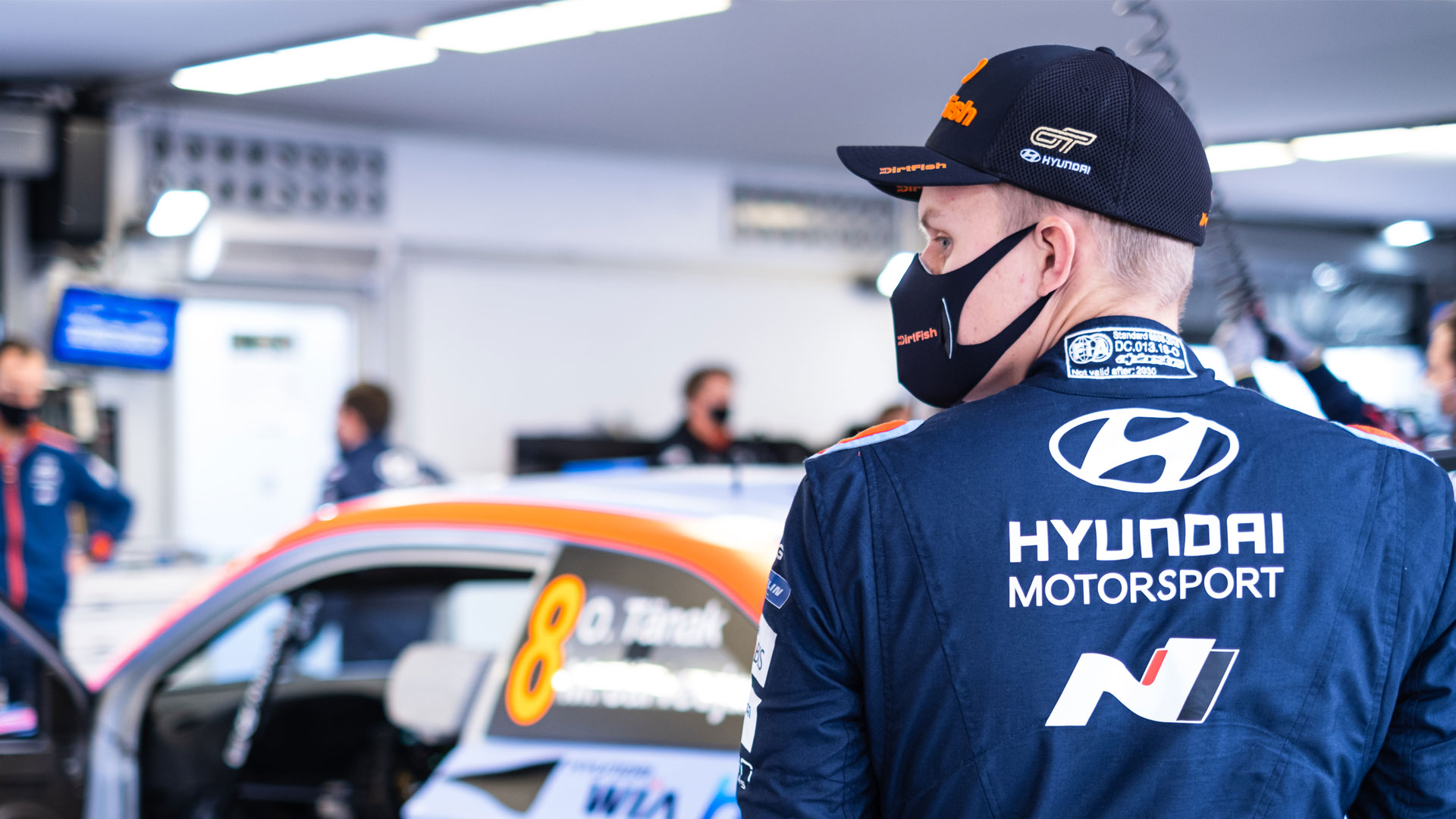 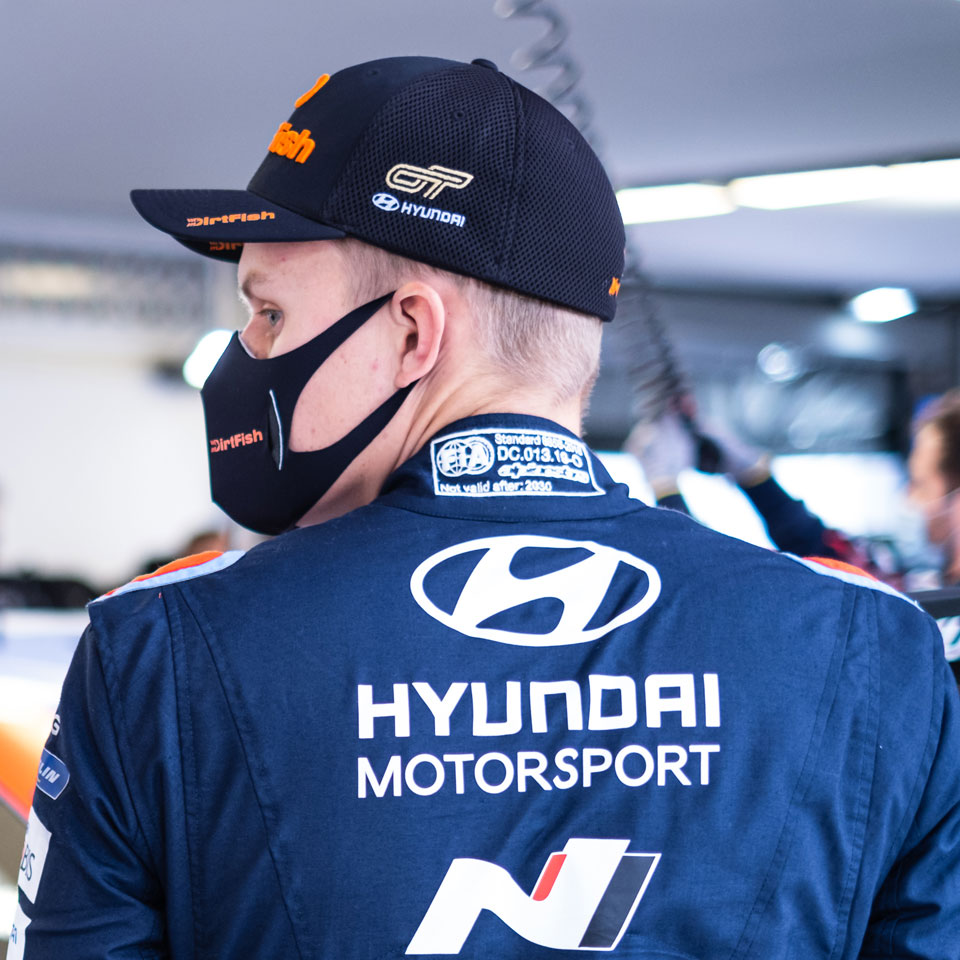